Fruit Zen brings us the calming effects of fruit on our monitor or phone screen with this 2014 Betsoft slot. The game not only features some great images of fruit and a calming background but will reward players with re-spins and sticky wilds as well.

This game doesn’t offer a lot in terms of theme or setting, as it is a very basic idea that the slot is built around. That’s not a bad thing as it makes things very easy to explain. Apparently, the developer thought that the concept of simply watching fruit spin on a 5-reel, 3-row playing field to be especially calming. To be fair, they weren’t exactly wrong. It might be a bit simplistic but the atmosphere does feel pretty relaxing.

In the background we only see a calm ocean and some rocks jutting out from the water, all of it steeped in the soft pink of a setting sun. The special symbols include a Stacked Wild that fills the screen with some lovely lotus flowers. All of it adds to the feeling of tranquillity and does what the title promises. Players who enjoy the classic fruit symbols but would like to see them in a different context might find exactly what they’re looking for here.

The game entirely takes place on the main screen as there are no bonus games or free spins. Players will constantly see the same symbols which I think fits the theme of zen, as constant change has the opposite effect on most people. When there is a win on one of the 10 paylines the game triggers a brief subtle jingle to help it stand out.

Fruit Zen makes use of a collection of very familiar fruits as the symbols in the game. None of them is original but they are all created using 3D software. Although the game is getting a bit older the graphics still look quite good, even if the fruits look a bit too smooth to be realistic. They also don’t have any animations when part of a win, instead simply being enlarged slightly.

The Stacked Wilds lotus is really the only original part of the game and though they do look nice, they also aren’t animated in any way. The only real movement in the game besides flashing wins are the coin totals and the waves in the background.

When playing the game, these symbols are present in the game:

Fruit Zen isn’t very heavy on creativity and that extends to its features. The developers have made the choice to keep their selection of features very simple and relatively limited but they do offer quite a big impact on the gameplay itself.

To begin with, a quick overview of the features themselves:

The game keeps the player on the main screen at all times, with not even a special splash screen or different background when the re-spin function is activated. The Wilds appear quite frequently on the screen. This causes them to become sticky and fill their reel, as well as activating a re-spin. As a result, players can be reasonably certain to see a win or two come out of it.

Occasionally, another Wild will appear during the re-spin which will trigger an additional re-spin. Considering all Wilds become Stacked and Sticky and that paylines count both ways, this makes it very easy to get a bigger win. With its Medium Volatility, the game clearly takes this into account and I found my funds to stay relatively stable during my time playing. Getting the features to activate is a good way to get a win, but they won’t instantly put you in the positives.

The game further features the possibility for players to pick a bet between £0.02 and £100 per spin, which can help make the game feel a bit more or less tantalizing. Players who prefer to simply spin the reels for their enjoyment and a zen experience can opt for a lower bet, while players that want to see how big the wins can get can bet higher numbers.

Fruit Zen offers players a maximum win of 2,000x your bet which I thought was an acceptable amount to win if we look at the volatility and the payouts that are offered. It isn’t as big as we find in most high volatility slots but I doubt there are many medium volatility slots that will be able to compete.

Fruit Zen is a game with a rather original concept even though it’s extremely simple and it also comes across as very basic in how it was implemented in the game. Still, that doesn’t mean the game does a bad job at giving players the right impression, and it even does feel like it is somewhat relaxing.

There aren’t too many features that would distract from the basic gameplay loop but they do offer enough of an impact on the game to feel like they are important. Players can walk away with some bigger wins if they manage to activate several of the stacked wilds at the same time, which did not prove impossible while I was playing it.

Players who are highly detailed or experimental slots will not find what they’re looking for here as the slot does come across as very simple. But, it offers enough for casual standard slot players to keep them interested.

Browse casinos with Fruit Zen and other slots from Betsoft. Create an account and try the game for free before making a deposit.

You can play Fruit Zen in English, Finnish, Swedish, German and 22 other languages. 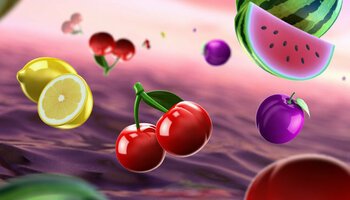