The slot experts at Tom Horn Gaming must have been hard at work trying to figure out a catchy title for the game at hand. I can totally see them deliberating for hours before finally deciding: We’ll call it, Fruit! And Fruit became the name of the game that has a rather juicy payout potential.

Playing Fruit was just a tad bit of fun, but it made me realise that most slot games that belong to that theme have stylised renditions of various fruits. The game at hand presents you, well, with fruits as they appear in real life.

But never mind that because I stopped caring if the reel set is full of potpourri or charcoals the moment I saw the max win potential. Fruit may appear like a fruit salad in the making but what it really is in its core is a decent old slot machine that can pay up to 25,000x your payline stake, which translates to a funky number that goes like this: 1,666.66x.

First appearances may be deceiving because in all honesty, despite the theme, the game lacks some major juice. But if you look beyond the landscape of lacklustre fruits, you will find wild symbols, win multipliers, a free spins bonus and a number of rather appetizing payouts.

The theoretical Return to Player of Fruit is 96.31%, which is above the average and the number of paylines is 15, which is like a life vest on which to hold on to while looking for some excitement on the reels.

The reel set is filled with fruits that have been drawn and rendered in a way that is realistic. This fact did steam a chuckle from me because it had just occurred to me that I've played many fruit slots and none had symbols like these. In other words, the overwhelming majority of games peddle imitation fruits instead of such that appear real. Why is that I don't know, but I like the change of scenery nevertheless.

On the other hand, a painful fact dawns upon you right from the get-go. You realize that the fruit symbols don't move, don't shine and you aren't going to see any dew sliding down the skin or any similar visual effect. The only symbol that can pull off a dance is the Wild symbol, which is a dish of fruits that simply does a pirouette on the Lazy Susan.

Yeah, the game is slow but it comes with a couple of elements that can liven up the harvesting season.

Needless to say, I didn't find the extra feature to be any more visually dissatisfying from the base game, however, there is a little bit of excitement because you do get 3x your win. But this isn't the only extra feature because you can land two kiwi fruits on reels one and five and play a pick-me game. The objective is to pick grapes that don't go sour on you because those don't come with a cash prize.

I am undivided in my opinion that the paytable is solid for a game that most players are likely to just avoid for the lack of 'cool factor'. But look closer and you will find a payout structure that lets you have your wager back by landing three fruits of the same kind, starting with the apples and lemons. These are the first two in terms of value in the category of low-paying symbols.

The only issue that I have with the paytable is that the latter symbols can also pay for two of a kind and these payouts are disastrously small. Landing winning outcomes for two symbols always felt like redundancy for me because I would rather not get that kind of payouts to leave more room for everything else.

Another point about Tom Horn Gaming's Fruit is the cost of the bet. Yes, you can select to play on fewer than 15 paylines, but what's the point of missing so many eventual winning outcomes. The downside to this is that the smallest bet that you can wager across all 15 lines is 30p per spin for 2p per payline. One notch higher and you are already paying a lot more to bet against this house of fruit, for the bet now costs 75p.

I was happy to experience both extra features and not just once so I can say that the low variance is in full effect as winning outcomes are more frequent than not. Payouts for two of a kind make for really slim pickings and so do payouts for three of a kind across the board of symbols.

As I said just above, with low volatility in place you are bound to see a good frequency of wins, but not at all significant in terms of value. The value happens during the bonus feature because a 3x win multiplier can grace any winning outcome and let you leave the market with a modest pocketful.

I can't say that I recommend Fruit to anyone. Few people will like to give it a chance and most people will just go for something with more substance.

Browse casinos with Fruit and other slots from Tom Horn Gaming. Create an account and try the game for free before making a deposit.

You can play Fruit in English, Finnish, Swedish, German and 22 other languages. 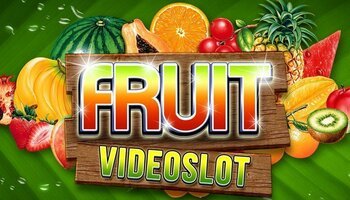