Fruitbat Crazy brings us a classic slot with a crazy fruitbat eager to help us get some big wins. I loved playing this game with its great images and tight selection of fun features.

Released in 2019 by developer Betsoft, Fruitbat Crazy is one of the newest slots out right now and it shows. The images are beautiful and animated, exploding in a fancy cloud when they’re part of a win. The titular fruitbat looks adorable and is a departure of the usual 3D-characters I’ve come to associate with Betsoft. Instead, this little critter is lovingly hand-drawn and looks ridiculously cute.

As for the game itself, it consists of 5 reels, 3 rows as the playing field and 243 ways to win. The paylines run from left to right as usual. As I was playing I wasn’t quite sure what the paylines were exactly, resulting in seeing wins pop up when I didn’t think they would. Maybe some kind of visual payline would have helped with that but those aren’t part of the game.

Before I get into the game mechanics I think I should give a special mention to the music. It’s high-quality as I expect from Betsoft, fitting the style of the slot perfectly with a cheery, upbeat song. The sound effects are a little simple but fit the game as well.

I remember playing this game for the first time almost a year award and the same enjoyment I felt starting it up then came back to me now. The game is very accessible and looks great although a little simple. I feel like it could have benefited from a little more character in the fruitbat but it plays like a classic fun slot.

Since the Fruitbat obviously loves fruit, the game has a bunch of fruit symbols as well as more classic slot symbols. From highest to lowest they are:

As you can tell, the maximum payouts for each payline are very low. I think this is offset by the mechanics of the slot that I’ll get into and of course the large number of paylines! In my opinion the Medium Volatility the game lists is fair as I got wins pretty consistently over a longer period of time.

The symbols look pretty but are largely uninspired. I imagine it must be possible to come up with symbols that have more to do with fruitbats than a Seven and a Diamond, but perhaps the creators wanted to stick closely to the classic slot vibe.

Let’s start with a quick list of the different features in the game since I think they are a big part of why I enjoyed this slot so much.

For me, the combination that makes this slot a winner are the Cascading Re-Spins with the Sticky Wilds. Let me explain why.

As you play, both during the base game and the Free Spins phase, any time you get a winning payline the symbols that are part of that win will explode. This will result in the symbols above them to drop down, potentially making new wins and allowing new symbols to continue dropping down.

When you get a Wild on the screen and they’re part of a payline, they will stick to the screen and not explode like the other symbols. That means as new symbols drop down, it’s likely that the Wild that helped to create a winning payline will do that again. What’s even better is that it’s possible more Wilds drops down!

During my time playing this was the best way to get a bunch of wins in a row. The game resolves the lowest paying win first, drops down the symbols, then resolves the next lowest paying, etcetera. Any Wilds already present stay in play until there are no more winning paylines.

The Buy Feature was an alright way to get into the Free Spins phase, but as always with this feature, you have to keep in mind you need to pay an upfront cost to activate it. That means you need to make back the cost first before you can start counting it as a win. In my experience, this happened quite often but not all the time, so it’s always a choice you have to make. When you use the Buy Feature you get 20 Free Spins.

I never really used the Double Up feature because the wins during the base game weren’t that impressive. It can be a nice way to add a little more risk to a spin but in general, I felt it was pretty unnecessary. Obviously, if you don’t like this feature you can just ignore it.

Fruitbat Crazy is a modern slot with the features to show it but its feet, or wings, firmly in the classic slot experience. The large number of paylines compensate for the large number of symbols which would normally make it harder to get a win.

The symbols look gorgeous and especially the fruitbat has his own personality. I wish they had inserted him a little more into the game though, as it stands he only shows up as a symbol and does not really exist outside of that.

Don’t get me wrong, I like the slot but I feel like they took some shortcuts in the design of the game. If they hadn’t, the slot would have had some more personality and might be a little more memorable too. For a game released in 2019, they need more than just an endearing animal symbol to stand out.

I liked the soundtrack a lot even though it keeps things relatively simple. If you like to play a slot with a catchy tune, it definitely delivers. Betsoft is pretty consistent with their music, which makes me wonder why they can’t have a similar approach to their graphics.

There are a number of features but they aren’t too complicated and work together well. I never felt overwhelmed or confused as to what each of them did. I think the combination of Cascading Re-Spins and Sticky Wilds is a real winner. In my opinion, they should have more slots with features that work together like that.

With its Medium Volatility and a max. win of 3645x your bet it’s definitely a slot to sink your teeth into!

Browse casinos with Fruitbat Crazy and other slots from Betsoft. Create an account and try the game for free before making a deposit.

You can play Fruitbat Crazy in English, Finnish, Swedish, German and 22 other languages. 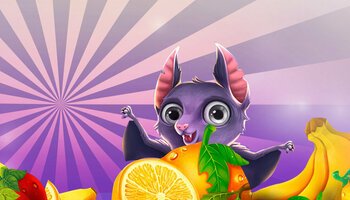