Fruits & Jokers: 100 Paylines is the latest instalment of the popular Fruits & Jokers series, this time with a massive 100 paylines!

If you’re in any way familiar with the Fruits & Jokers series as we can call it now, this slot won’t offer many surprises. It presents the same rudimentary slot experience with updated graphics and some Quality of Life additions but you won’t be discovering amazing details in the background or exploring some original feature.

What you see is very much what you get in this slot. The game is built out of a 5-reel, 4-row playing field with the predictable 100 paylines. Unlike the popular 243 ways to win, this means that not every series of symbols that appear on 3 or more consecutive reels will result in a win. The fact that there are 100 betting lines makes it more likely that symbols appear on one of those lines but it still requires them to appear somewhere that has been designated as one.

There is also quite a lot of overlap between paylines and the game makes it a point to tell you how many of them you hit. Any horizontal three-of-a-kind, for example, can use a dozen different betting lines. It’s also why the win value for a single line is low since it’s almost impossible to get only 1 payline to pay out, although it did happen occasionally!

The game was developed by Playson and released in 2019. There are a collection of familiar fruit symbols which look a lot like other slots this developer released, such as Mega Burning Wins. They’re not identical so I don’t consider them blatant copies but the similarities are nonetheless striking.

When it comes to the sound design I can be brief, there barely is any. There is no background music during the base game at all, with only brief jingles playing on a win. Bigger wins solicit a bigger jingle but it’s still nothing to write home about.

The game stays close to its fruit machine roots which means you won’t find many original symbols here.

As I mentioned before the low win value for a payline might seem offputting at first but it’s important to remember that even the simplest win will hit a dozen or so paylines in this game. That means it’ll pay a lot more in actuality since all of these are added up together.

There are only a small amount of features in Fruits & Jokers: 100 Paylines. I’ll go over them quickly first:

The features are simple and add only a little to the base game experience. The Stacked Wilds were a nice addition but only appear very sparingly. I can’t even be sure if it’s an actual feature or just a result of spinning enough. Almost every spin would have at least one symbol appear stacked but I think that was just a result of the low number of different symbols.

I felt that as far as fruit machines go, Fruits & Jokers: 100 Paylines stays very close to the classic experience. The features don’t take away from the base game and only slightly enhance it. I did like the way the game tells you how many paylines you hit when you get a win, and it was kind of a sport to see how many paylines I could get at the same time. My record was 90!

Fruits & Jokers: 100 Paylines is a game that knows what it wants to be and puts it up, front and centre. The slot uses a standard collection of symbols and a few rudimentary features to keep us entertained.

It should be obvious by now if the game will appeal to you. If you’re looking for a rather standard fruit machine that’s been updated with modern-day visuals then Fruits & Jokers: 100 Paylines is a great choice. If you played the previous instalments and liked those you’ll also get a kick out of this one.

Players that want something more modern are unfortunately not going to get as much out of this game. The features are minimal and the symbols are quite derivative of decades of fruit machines. A soundtrack might have given it some character but there isn’t one either.

The slot has a Medium Volatility even with the 100 paylines. Players can choose a bet between £0.20 and £100 per spin. The max. win of 2,545x your bet is actually quite impressive and I found the game to be quite liberal in handing out bigger wins. As always it does pay to start off careful!

Browse casinos with Fruits & Jokers: 100 lines and other slots from Playson. Create an account and try the game for free before making a deposit.

You can play Fruits & Jokers: 100 lines in English, Finnish, Swedish, German and 18 other languages. 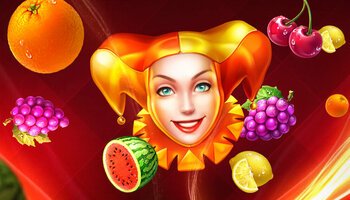