Fruits Land is a place where everything is made up of fruit and that means we’ll have a tasty, colourful slot to look forward to! With a special bonus game and Wilds, the game promises some interesting gameplay.

Developer Evoplay Entertainment released this slot in 2016. While the game is completely filled with fruit symbols the designers put in the time and effort to make these symbols look sharp. I thought they look great even though they are totally unoriginal. The game has a 5-reel, 3-row playing field with only 9 bet lines. By having a Pays Both Ways feature this is essentially doubled though.

In the background, we’re treated to a vague drawing of the countryside with a hut to the side. It doesn’t really evoke the sense that we are currently in something that deserves the title Fruits Land though. Whenever there is a win the symbols turn out to be 3D as they rotate, a subtle but well-done effect.

As can be expected all symbols except the Bonus and Wild are based on fruits. They are made to look slightly cartoony with a realistic twist. I thought it looked fine and with the use of some sharp colours, it has a distinct style.

Even though the symbols look good there is a sore lack of creativity. Even with fruit, there must be more to do with it than just making it look high-definition and spin around. The Bonus and Wilds symbols are perhaps even worse as these are just simple grey blocks with the word on them. It seemed like fruits were about the most creative the team could get.

Fruits Land has a few simple features that aren’t anything too original but I liked their implementation into the game nonetheless.

I found all three of the features to pop up frequently with mostly the Pays Both Ways mechanic playing a big part in creating wins. The game has a Medium Volatility which didn’t really mean there weren’t a lot of wins but it was that most wins were small with only the occasional bigger win.

As a result, I found my funds to decline quite quickly as I was playing. Obviously, this will be different for other players but it is something to keep in mind. Players have the opportunity to choose a bet between £0.10 and £500 per spin but I would urge people to start low as they get to know the slot.

The game only has 9 paylines which is quite low but this is essentially doubled through the Pays Both Ways mechanic. The game does a good job at highlighting the winning symbols, greying out the rest of the reels and giving them a quick spin. The animations on this are also well done.

I thought the Bonus Game was the biggest departure in terms of originality, even though it stays close to the idea of the slot. The game shows us five rows of 5 symbols each. Instead of spinning them, the player picks one symbol per row. The bottom row awards a 100 coin win. The second row has a 300 coin win and a Collect symbol. If the player clicks on the Collect the bonus game ends.

Each subsequent row has a bigger coin win but also an extra Collect symbol. On the fifth row, the player has 5 Collect symbols and only 1 win symbol. If they manage to pick the correct symbol they are awarded all coin wins they have gathered up to that point. The game has a max. win of 404x your bet which seems most likely to be won during the Bonus Game.

In my opinion, the game does a decent job at changing up the gameplay without straying too far from the standard slot experience. The features are simple and don’t really change up the game but they’re frequent enough to feel like an addition.

Fruits Land has about the same level of creativity as you’d expect from a game with this title. Evoplay embraced the lack of originality and instead focused on creating a simple but effective slot. There aren’t a lot of features to augment the experience which is perfect for those that enjoy these simple slots.

The game didn’t seem to be very lenient in creating wins even with medium volatility and my funds steadily declined over time. I never really felt like I had a big opportunity to get a massive win, with the bonus game being very difficult. During my time playing, I never got more than 3 correct guesses.

If you’re someone who enjoys standard slots with some nice graphics and some simple features you might get something out of Fruits Land. Unfortunately for everyone else, I would recommend you skip this slot.

Browse casinos with Fruits Land and other slots from Evoplay Entertainment. Create an account and try the game for free before making a deposit.

You can play Fruits Land in English, Chinese 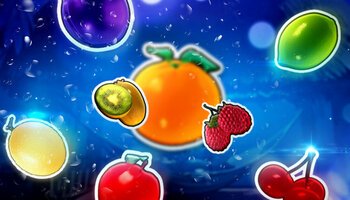