Neon is the preferred medium for making bar signs in Las Vegas and fruits in neon-themed slots. I can't find any fault in that, especially not if a game has a maximum payout potential of 80,000 coins.

Fruits of Neon comes by way of Fugaso - that's Future Gaming Solutions for the uninitiated. The company has a network of progressive jackpots and Fruits of Neon is part of it, which gives an extra fine edge to the gameplay.

I like the layout because it is different from the prevalent 3x5. I also think that layouts that have four rows and five reels only make sense when the number of paylines is greater, such as 40, and Fruits of Neon checks for that also.

There are two extra features that can spice up the neon-filled night. Players can get stacks of the same symbol posting on more than one reel both in the base game and in the free spins bonus. In addition to making winning outcomes according to the paytable, either one of the three progressive jackpots can drop from any spin.

The above sums up the feature of the game, but it doesn't really grasp the look and feel of the gameplay. I've seen my share of neon-inspired slots and actually really enjoy the theme, so the game at hand gets a high mark by default for its graphics, but I can also feel that the math model is quite benign for a progressive jackpot slot.

I haven't been to Las Vegas but this must be what neon in the dark sky looks like. The shapes along the edges of the reel set are probably inspired by a drive out of the city, perhaps headed to Reno, while passing by signs that beckon low and high rollers to quench their thirst in one of the bars.

In addition to the genuine conception of the symbols, Fruits of Neon throws in some animation magic, as each winning outcome is made known by the crackling and zapping as the noble gas escapes the cracked tubes. For a moment, it looks like atoms are circling each symbol in a cool display of visual effect craft.

I am sorry to say that the musical score is innovative and pitched-down to a tempo that fits perfectly the spinning of the reels, which is a tad slower than the usual.

A set of multipliers would have done good to the bonus and to the potential payouts, but I guess Fugaso had another idea how to put together Fruits of Neon. I can't say that Super Fruits is a way to compensate for that, even though this feature can cause sizable winnings to crop up from any spin.

I can't say that I am too impressed with the figures on the paytable, as I've played games by Fugaso that have a structure that is at least double for each symbol kind. On the other hand, I am quite aware that this is a progressive jackpot slot and that the 40 paylines create room for multiple payouts from the same bet.

Nevertheless, the high-paying symbols are represented by 3D renditions of grapes, strawberries, bananas and watermelons, all wrapped in neon. The payouts for five of a kind are between 2x and 5. Four matching symbols on a payline pay between 0.75x and 1.25x and wins consisting of three pay way below the bet amount, between 0.4x and 0.5x, which leaves us with the category of low-paying symbols that is quite forgettable.

I like the way Fruits of Neon plays. The graphics are cool and give the entire experience a low-key feel. As for the payouts, the size of the outcomes really depends on the stacks. If you get two stacks, it is very likely that the payout is going to be worth noting.

I said that wilds are also part of the Super Fruits feature, which can help turn low-paying symbols into meaningful prizes. Then there is the possibility that one of the progressive jackpots can drop on any spin.

Overall, I am not too crazy about Fruits of Neon, but I think it's good enough for players to give it a try.

Play Fruits of Neon for free

Browse casinos with Fruits of Neon and other slots from Fugaso. Create an account and try the game for free before making a deposit.

You can play Fruits of Neon in English, Swedish, German, French and 7 other languages. 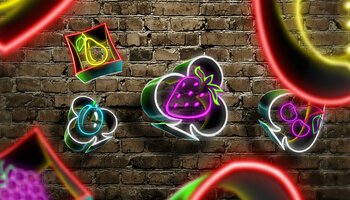