Gaelic Gold brings us back to the lush green fields of Ireland with its rolling hills, pots of gold and of course a leprechaun clad in green. Players are invited to watch the 3-reel, 3-row playing field spin a series of fitting symbols as well as introducing free spins and stacked wilds.

The slot was developed by No Limit City who released the game in 2020, which shows in the quality of the graphics. Everything looks very crisp with a sliding gradient to many of the graphics. Especially the leprechaun is drawn very nicely and has some subtle animations to make it come alive. The biggest downside here is that it only appears on a Stacked Wild, which means it’s not a huge part of the game.

The game only has a small playing field which also means it only uses a small number of paylines, with 5 bet lines in total. Getting a win will slightly light up the tiles and play a simple animation, which isn’t quite enough to make the game come alive. The symbols are also largely uninspired, even ignoring the card letters that make up the low-paying symbols. The high-paying symbols make use of all the tropes associated with Ireland.

Players that play this slot have to deal with its Medium Volatility which is a result of a large number of symbols, the low number of paylines and the relatively decent payouts. Since the game only has 3 reels it also only has three-of-a-kind wins.

Gaelic Gold doesn’t stray far from the classic slot in both the gameplay and the creativity, keeping the symbols in the slot related in a very obvious way with the Irish theme. Luck and Ireland are obviously very closely linked in folklore, which means that any slot with it as a theme will always include the usual symbols.

Even though the game is rather simple, it does offer players a few reasons to play. One of them being the impressive max. win of 9,837x your bet which is quite high considering the volatility and the classic slot design. That doesn’t mean it will be easy to win, but it does feel within reach. The game lets players pick a bet between £0.05 and £100 per spin to mitigate or increase any risk.

Gaelic Gold is a classic slot in many ways when it comes to its gameplay, but it does feature a number of alterations that change the way the game plays. I don’t think this will be too far away from the normal gameplay to scare off fans of the classic slot, but they might appeal to more modern players.

The main portion of the game will be played in the base game, but that doesn’t mean the free spins mode only activates rarely. I wouldn’t be able to accurately predict the frequency at which it was triggered but since it only requires a single symbol to appear, it really only depends on that one symbol.

Because it is rather frequently enabled, it also isn’t very effective. The game grants the player 5 free spins when the Bonus symbol appears on the screen. After this, 10 coins are shown. The player gets to pick coins until they choose the Start coin at which the free spins mode starts and no additional coins can be picked.

These coins hold additional free spins, extra multipliers and Rainbow Lines which are extra win lines. All of these are active during the entire free spins mode. Unfortunately, they often barely help in getting more or bigger wins and I rarely found the free spins to be substantially helpful. Still, it’s always nice to activate.

Gaelic Gold is at the surface a standard classic slot that offers only a nice-looking version of the familiar video slot. The symbols are very unoriginal even if they are drawn well. The background is a very generic number of green hills, causing the game to be extremely difficult to remember even after playing it for a while.

The features do some work at making it an interesting slot though because they are not very difficult to understand but they appear often and change up the gameplay somewhat without demanding a lot from the players. Especially the free spins mode is interesting, as long as you manage to pick a large number of coins before choosing the Start coin.

I thought the game was enjoyable if not very memorable and I’m afraid most players won’t remember the slot for very long after they close it. The sizeable jackpot might inspire some people to give it a try since it is quite high for a game such as this.

Browse casinos with Gaelic Gold and other slots from Nolimit City. Create an account and try the game for free before making a deposit.

You can play Gaelic Gold in English, Finnish, Swedish, German and 13 other languages. 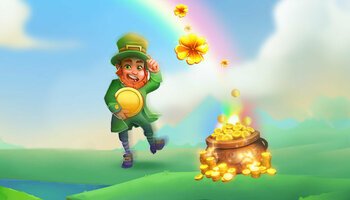