Before the emperor decides if it is going to be a thumbs up or down, you have to fight the Game of Gladiators like it is your last one... because it may as well be the last thing you get to do before they unleash the tigers.

Oh, it was a brutal world for the gladiators of Ancient Rome. They were rugged people who fought till death for their lives and in order to please the cheering and sneering throngs of the Colosseum.

Seen from this point in time, I highly doubt that I would ever want to witness a gladiator fight, regardless of the cool factor associated with it and the adrenaline rush of catching a glimpse of loose viscera.

A slot game called Game of Gladiators is more of what I would prefer for something as close to a mad dash through a gauntlet of armed lunatics because winning that ordeal could amount to cash prizes of up to 5000x your bet.

I like Game of Gladiators because Play'n GO did justice to the theme of gladiator fighting. This is one of the most energetic renditions that I've seen and one that comes with a superb set of extra features: expanding wildsand a free spins melee that can go on indefinitely, as long as you beat those enemies.

Those who are iffy about playing this game need to take into consideration all of the expanding symbols, the awesome graphics and the 20 fixed paylines for a high variance game.

There is no need to mince words here - the game doesn’t leave much to the imagination. All of the gladiators have been drawn and rendered perfectly in order to strike their signature fighting pose, weapon in hand and a deadly smirk on the face. The different gladiator types can all expand across the length of the reel and thereby improve the chances for bigger winning outcomes, whenever conditions on the reel set are ripe.

Play'n GO has included an animal that is exotic to Ancient Rome - the tiger - as the game's wild, which is also an expanding symbol that can pay a top buck. Things can get really heated up on the reels during the free spins battle, where Game of Gladiators tends to throw in a greater number of expanding symbols, including the wild.

Winning outcomes are annotated by a flash of light through the payline, which adds another cool effect to the overall display on the reel set. There is also the epic musical score that I really enjoyed for its huge sound produced by a symphonic orchestra, which you can readily transplant into a movie of the same theme.

Game of Gladiators has one bonus feature and a few extras that are an integral part of that feature. Starting with the wild symbol, it helps make payouts by substituting for all standard symbols, both in the base game and during the free spins.

Much to my surprise, the paytable appears to be quite normal.

In other words, the multitude of modifiers and multipliers hasn't been compensated for by Play'n GO curtailing the symbol payouts.

A good sign of a favourable paytable is the amounts that you can make with the high-paying symbols. In that respect, there isn't a single symbol that pays less than 1x.

Game of Gladiators was released in 2019 and can still hold its own. Players who have tried gladiator-themed slots are aware that the graphics are all about action, while the gameplay fails to match that tone. In this example we have dynamic gameplay that is matched by good graphics, engaging music and a set of features that keep coming on during the bonus feature - which is the only reason why I returned to the game.

Play Game of Gladiators for free

Browse casinos with Game of Gladiators and other slots from Play'n GO. Create an account and try the game for free before making a deposit.

You can play Game of Gladiators in English, Finnish, Swedish, German and 29 other languages. 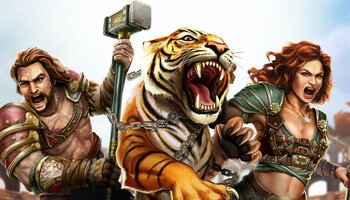 Fun game to play. Name and the design reminds me about Game Of Thrones but probably that was the reason I even tried it. I would add sticky wilds into the game, but overall nice experience and had some winnings too!