The game was developed by Slingshot Studios and is powered by Microgaming. It is played on a grid containing 5-reels and 4-columns with 40 paylines. The battle happens right outside of the wall with snowy landscapes as the slot’s background. To the fore, there are some exquisitely designed graphics and an even more thrilling soundtrack.

Whenever a win is registered, some beautiful animations happen. When it comes to the high-paying symbols these are short clips from the most iconic moments. Score a Big Win and you will be rewarded with dragon fire and plenty of coins.

On the bottom left of the screen, you will see the PowerStacks symbol and a box. This box will be randomly assigned a tile at the start of every spin. That tile then has a chance to become Super Stacked during that same spin. In the base game, all symbols - including the coins - can be stacked bar the wild and the scatter.

Three or more scatters will trigger the bonus round giving the player 15 free spins. During this round, all wins are immediately multiplied by 2. Wilds can also appear stacked.

During both base game and free spins if you land 6 or more coins you will trigger this feature. The reels will change and only leave those coins in their reel position as sticky. Three spins are awarded. As you spin, more coins can be added to the reels. As more coins are added, these are held into position and the respin counter is reset to 3 spins. The feature ends either when there are no more spins available or when all the reels are filled. This will trigger the Valyrian prize and award the max win of 25,000x. At the end of the round, all coin symbols will payout no matter their position.

Let me start by declaring my bias. Despite the way the series ended I am still a huge fan of Game of Thrones. And this slot delivers well on the GoT world. Everything is there; the most loved characters of the game (although I did miss Arya), the gorgeous soundtrack and best of all, dragons(!) when you hit those big wins. It definitely feels like whoever designed this slot was a fan of the show.

Then there are the mechanics. It is a high variance slot and you will notice quite a few spins where nothing happens. Some of the wins may also seem quite disappointing especially when you have stacked symbols. Even though this slot has 40 paylines it is played on a 5x4 grid. However, the power stacks can also create some interesting wins especially if they feature the high-paying symbols or the coveted Coin symbol.

Yes, we’ve seen these bonus features elsewhere but mixing them makes for some interesting gameplay. Even though the bonus level only comes with a 2x multiplier and the possibility of stacked Wilds it still made for a thrilling experience and a win of 75x. OK, that’s not the 25,000x max win but you can definitely see the potential, especially in the Link&Win feature.

Browse casinos with Game of Thrones™ Power Stacks and other slots from Microgaming. Create an account and try the game for free before making a deposit.

You can play Game of Thrones™ Power Stacks in English, Finnish, Swedish, German and 26 other languages. 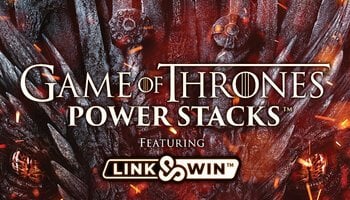