Gemmed! is a strange game. It attempts to do something new, but there might be a reason why this hasn’t been done before.

Betsoft’s Gemmed! was released in September of 2019 and it truly was something we hadn’t seen before. This slot combines a large grid-based screen with a regular slot trying to make a game with the best of both worlds. Unfortunately, it just made a mess.

The end result is a confusing game, where everything is just odd. Visually perplexing, thematically baffling and just plain hard to understand.

It takes a while to wrap your head around Gemmed! and the rules info doesn’t make it any easier. When you finally understand how the game actually works, you have already seen absolutely everything the game has to offer.

One of Gemmed!’s big problems is obvious the moment you launch the game. The game looks extremely confusing. It has the appearance of a grid-based cluster game, but that’s not the case. It also looks a bit like a Megaways game with Win Any Ways feature, but no.

Gemmed! is a regular slot with a very strange set of rules. This makes it hard to learn and bothersome to master. If the game wouldn’t count my wins, I would have missed more than half of them and tried to claim wins from where there weren't any.

Next, we can take a look at the theme. The game is all about gems, but only the scatter symbol and the wild are clearly gems. Other symbols either are dirt or look like coloured metal slabs. The nature in the background looks nice, but I was left asking why are we digging for diamonds inside a tree?

The only thing that is fine about this mess is the audio. The music is delightfully whimsical and adventurous, and the sound effects are all nice. Nothing to write home about, but perfectly adequate.

The first question I asked when I saw the symbols was, are there actually any gems here? There are a ton of shiny things, but they just look like imprinted metal plates of different colours.

The game has a total of 16 symbols, which is one reason why you aren’t going to be seeing many wins. There are 6 low-tier ones, 5 mid-tiers, 3 high-tiers and 2 special symbols, a scatter and a wild.

The hardest thing for me to wrap my head around was the paylines. The game has 40,503 paylines, but they work a bit strangely. You start from the left reel and see if the symbol on the next reel touches the first one either horizontally or diagonally. If it does, then you can move to the next reel and see if it has another touching symbol. If there are at least four, then you win.

There are scatter symbols which can activate the Free Spins feature. It was a bit of a letdown, as there was nothing different about them. You just don’t lose any money while you spin them.

So how do you win in this game? You need to hit long lines and get those colossal symbols on the first reel. Don’t worry about the scatters, as the Free Spins feature isn’t worth it. Just hope you don’t get too many dry spells. Simply put, winning isn’t going to be easy.

The cut gems symbol is a scatter that can pay out from anywhere. Four is enough to win and five is required to activate the free spins. The more you get, the more spins you win. You start off with 15 spins, but can get 20, 25, 30 or even 40 spins.

The free spins are no different from regular spins, other than you won’t need to pay to play. Scatter symbols are still there and you can retrigger the spins.

After each win, you have the option to gamble it. Just click the Double Up button and you get to play a coin toss minigame. You can bet either 100% or 50% of your win and call either heads or tails.

The game is over when you either lose everything or collect what you have won. This means that playing with 50% is a bit safer.

Well, this was an experience. Betsoft’s games can vary in quality and this one isn’t that great. When I first laid my eyes on it, I knew that this was going to be a bumpy ride.

I do have to give credit where credit is due. The slot sure is original. The way the paylines work is something we haven’t seen before, but maybe it’s for a good reason. The slot was extremely confusing and I have played a lot of strange games before.

I’m having a hard time coming up for anything really positive about the game. At first, I was hoping that the free spins would somehow rescue the otherwise dull game, but alas, no. They added nothing to the mix, which diminished my last ray of hope.

This is not the worst game I have ever played, but it comes close. I found no reason to come back to this slot ever again.

Browse casinos with Gemmed! and other slots from Betsoft. Create an account and try the game for free before making a deposit.

You can play Gemmed! in English, Finnish, Swedish, German and 22 other languages. 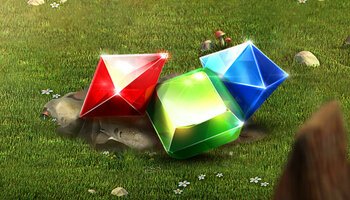