In the depths of the secret Aztec mines, the gold flows endlessly and the jewels come pouring down. In the Gems Bonanza slot game, you get to peek inside, collect the colourful gemstones and with them ask for the favour of the ancient gods.

Gems Bonanza is a high volatile slot game, but it’s the kind without any actual reels. Instead, it’s an 8x8 sized grid where you get to blow up gems. The gems give payouts on their own but they can also hide secrets. These secrets may do just about anything, from adding a random colossal gem to clear the entire grid.

The game greatly resembles Play ’n GO’s popular games, such as Gemix and Energoonz. Both of these slots also work on grids and the player can collect different kinds of boosts to increase their chances of winning. So, if you’re a fan of the games like these, Gems Bonanza might be right up your alley.

By collecting the gemstones you also collect points to the Gold Fever meter. By filling up the meter opens the bonus game with a chance to get your 10x your winnings!

Although the theme doesn’t get much explanation in the game, it’s still pretty obvious by looking at the stone statues and faces. If the Aztec’s style isn’t familiar, then you might recognize the similarity with NetEnt’s famous slot, Gonzo’s Quest. There are lots of shiny and colourful gemstones covering the grid and the features have been done well. Though, I wouldn’t expect any less from Pragmatic Play at this point - their games have been looking better and better each year.

The music is well-composed and quite atmospheric. I was very happy to notice that I didn’t catch the end of the track, meaning that the music loops perfectly. This makes it easy and enjoyable to listen and it doesn’t get on your nerves.

Gems Bonanza is a slot game with an 8x8 grid. Winning combinations need at least 5 of the same kind of symbols touching each other either horizontally or vertically. The position of the combination doesn’t matter.

The game also has Wild symbols which are golden tablets with a small, green gem embedded inside. This symbol only appears as a part of Wild Gem and Lucky Wilds features. It substitutes any other symbol in the game.

The Spin feature marks occur randomly and you can get up to 5 of them glowing behind the normal symbols. They activate if the symbol on top is a part of a winning combination.

The Spin features only start after there are no more winnings to collect from the base game. If you manage to collect more than one Spin feature at the same time, they trigger in the following order:

On each spin, the winning symbols are converted into points. These points are then added in the Gold Fever meter and if it fills up, you’ve won the Gold Fever progressive feature.

Gold Fever has five levels and the feature starts from level 1. Each level has its own minimum number of points to collect if you want to advance on a higher level. With every level, you also get a better win multiplier:

Gold Fever ends when there are not enough points for the next level, or after all of the Spin features of level 5 have been used.

In short, on each level, you get to use all of the Spin features in the order mentioned above. It might be enough to fill the Fever meter, or it might not.

Apart from many other providers, Pragmatic Play feels like they’re trying to create something new with every game. Not just recycling old material or mechanisms from other slots. With Gems Bonanza, however, they have copied many ideas from others and might have been better off adding more of their own ideas.

Like so many slot games with grid, there’s so much happening but the payout for it is usually a let-down. After my first chains of wins and triggering a couple of Spin features, I was amazed that I only won around 4-5 times my bet. Sometimes even less than that. The base game is very mingy indeed, and it’s not an easy task to fill up the Gold Fever meter needed for the chances of better payouts.

Also, at first, I didn’t quite get the Nuclear feature. It just blew everything up and filled the grid with a new set of gems. This felt oddly unbalanced as the other features actually make it possible to win more and it’s not nearly as probable with the Nuclear. But, after visiting the Gold Fever feature, it made more sense. As all of the Spin features activate during the Gold Fever levels, every level always starts with the Nuclear clearing off the table. This also removes any remaining Wilds and thus brings down any better chances for you to pass the level. Sneaky.

In summary, Gems Bonanza is a gorgeous slot that’s fun to play, it has multiple interesting features and the potential for sizable winnings. But, it also requires a hefty balance and time.

Browse casinos with Gems Bonanza™ and other slots from Pragmatic Play. Create an account and try the game for free before making a deposit.

You can play Gems Bonanza™ in English, Finnish, Swedish, German and 20 other languages. 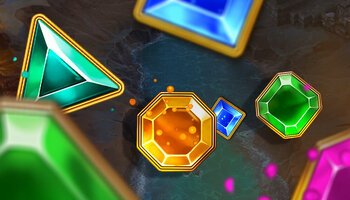