Gems of Adoria brings us high into the sky where mythical ruins float in the aether, as a series of great gems spin through the air.

The fine folks at NetEnt have gifted us with another jaw-dropper of a slot with Gems of Adoria, released in 2020 with a level of graphic excellence I haven’t seen before. The game boasts a fully 3D-landscape that the game makes good use of, showing us different viewpoints of the game as well as incorporating it into the gameplay itself.

At first glance, the game seems to be set on top of some strange ruins that are floating high up in the middle of nowhere. Remnants of pillars and stairs still hang in place as if remembering they were part of something bigger a long time ago. It all evoked a strange sense of mystique, and within that setting, we begin to play.

Gems of Adoria has a 5-reel, 3-row playing field with a total of 15 paylines. The entire game is made in 3D. This is amplified by the fact that the viewpoint is rather low compared to other slots, giving us a slight view of the underside of the different reels. All the graphics are beautifully sharp as well as very detailed.

The sound design was good without being overwhelming, adding to the feeling of mysticism as the music was kept subtle and dreamlike. Getting a big win would play an enthusiastic song that didn’t last for too long.

Since there are multiple features that change the order of things inside the playing field, the 3D-effects really shine here. There are rotating spins, Wilds that are dropped on top of the other symbols and more.

Keep in mind that all this movement makes wins more likely, and as a result, NetEnt has given this slot a Low Volatility which fit my experience. Even though it’s nice to see the different wins appear, it’s not a guarantee that you’ll see your funds go up by much!

The game is rather simple with its features, even though it’s rather extravagant when it comes to the visual aspects. Gems of Adoria actually stays rather close to the classic slot experience, with only a few modern features included.

First off, a quick overview:

As you can probably tell, most of the features are pretty familiar to even the most casual players. The Striking Wilds are a nice addition but I did not see them appear that often. Still, an extra 2 to 9 Wilds added to the playing field is always welcome!

What really added to the experience for me were the Flipping Symbols. Once the reels stopped moving, and any Striking Wilds were added to the game, the different symbols could begin to flip. When that happened, symbols would rotate 180 degrees around their axis and essentially swap places. This would always mean I’d end up with a better result than I had before, so don’t worry that you’re losing anything when it happens to you!

I found this to be an excellent use of the 3D nature of the slot, even though it can be implemented in a 2D slot as well. It was just a nice addition to the game to show off the extra angles the game had as the feature activated.

In general, the slot has only a few features but they do enough to give Gems of Adoria its own distinct style. Coupled with the great graphics, I’m sure this slot will appeal to a large number of players.

Gems of Adoria is the perfect slot for players that enjoy a relatively classic slot experience but want to have something beautiful to look at. NetEnt has managed to really go all-out with their 3D art, not only giving the game a stunning appearance but even utilising this in the presentation of their features.

Don’t get me wrong, all the features in Gems of Adoria would work perfectly in a 2D slot too, but the developers have integrated it very well. Especially the Flipping Symbols feel like a natural part of the way the game is portrayed, making it feel much more lively.

I enjoyed Gems of Adoria a lot, but mostly for its style. The gameplay is rather simple and the low volatility meant that despite the high amount of movement and animations, the wins kind of lagged behind. This was slightly manageable with the choice to bet between £0.10 and £200 per spin, but the max. win of 1,250x your bet did feel small considering other similar slots.

If you’re a player that’s looking for something visually stunning but a slot that’s not totally reinventing the wheel, Gems of Adoria should be right up your alley! It gives players a lot to look at while simply spinning the reels is enough to get everything out of the game.

Play Gems of Adoria for free

Browse casinos with Gems of Adoria and other slots from NetEnt. Create an account and try the game for free before making a deposit.

You can play Gems of Adoria in English, Finnish, Swedish, German and 20 other languages. 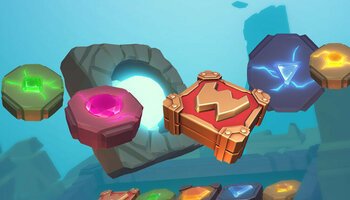