Gems & Stones is an Endorphina slot that predictably centres around gems and stones to fill its reels. The game lets players use expanding reels and free spins to help create wins but the High Volatility won’t make it easy.

Developed and released back in 2014, the graphics of Gems & Stones are starting to show signs of ageing. Even on a smaller screen, the symbols aren’t sharp and the details, in general, are not quite up to par with newer slots. This also isn’t helped by the fact that the symbols are very simple, either different kinds of gems or basic card letters.

The 5-reel, 3-row playing field gives each symbol ample room to show off but there isn’t much to show. When the high-paying symbols are part of a win on one of the 10 paylines they will play a brief animation but those are just the gem spinning slightly. It all came across as very rudimentary to me, even when compared to other slots that came out during the same time such as Blast Boom Bang or Gladiators.

When it comes to the sounds, Gems & Stones also doesn’t work very hard to try and introduce something new. The game is mostly completely quiet except when there’s a win, playing a short piano jingle. Other times it’ll play a more jazz sounding song but it’s equally brief. They only serve to punctuate the wins and aren’t used to set the mood at all.

The symbols in the game are all simple representations of different gems or card letters. The special symbol is a box that acts as a Scatter symbol as well as hiding the expanding symbol during the free spins mode.

Each of the symbols is distinct from each other but I found them pretty boring to look at, both their general look and the animations that play when they’re part of a win. When there’s a win the game shows the payline as well as highlighting the symbols involved.

The payouts are alright but not really worth the high volatility. The high-paying gem symbols payout when there is two-of-a-kind on a payline, but only 0.5x your bet. Meanwhile, the card letters also only pay out 0.5x your bet with three-of-a-kind.

This means you’re generally going for longer paylines to make back your bets as getting multiple wins on the same spin is unlikely except during the free spins mode. To augment the risk, players can pick a bet between £0.10 and £100 per spin.

Gems & Stones has a very small number of features and they only really come into play during the free spins mode. This makes the game very easy to understand, but it also means that most of the gameplay will feel barebones.

That’s it. During the base game, there are no features at all. The game plays from left to right, as usual, it has an average number of paylines and no Wilds. The player will be completely dependent on symbols simply showing up on the right spots to generate a win.

Some players will probably enjoy this ultimate rudimentary experience but I found it slow and boring. There’s a reason most slots have different features to spice up the gameplay as we’ve seen this done for years. Even older slots have more features.

The only thing that can happen during the base game is to trigger the free spins mode. When it does, players receive 10 free spins. You won’t get more free spins if you get more than 3 scatter symbols on the screen either. It is possible to get additional free spins during the mode, but again this is a set number of extra spins.

Before the free spins start but after they are triggered we’re shown a chest. This chest shows a random symbol that will be used for expanding reels. During the mode, every spin will first award the win for that spin before expanding the selected symbol to fill the reel it is on. If that creates any new wins, those are awarded as well. This happens every spin.

I found this feature to be okay but having a low-paying symbol selected is actually better than having a high-paying symbol, since they appear on the screen more often and are thus more likely to create extra wins by expanding.

Gems & Stones is a difficult slot to write a review for since it’s so rudimentary as a classic video slot. It has some features but they are gated behind the free spins mode, with absolutely nothing going on during the base game.

The graphics are outdated with some terribly simple ideas and animations, while the sound design is merely used to emphasise wins and no effort is made to set the mood. Even the age of the slot isn’t an excuse for how basic it looks and feels, comparing it to slots made by Endorphina released around the same time.

Players that want something very simple, maybe as a first time slot, might get something out of this game. Everyone else will probably find it dreadfully boring. It’s not even very interesting for its volatility as I found it to mostly drain my funds and barely granting me wins big enough to make back even half my losses. The max. win of 5,000x your bet is a nice incentive but I never felt I got very close.

Browse casinos with Gems & Stones and other slots from Endorphina. Create an account and try the game for free before making a deposit.

You can play Gems & Stones in English 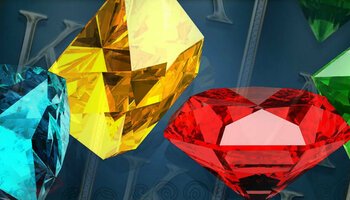