Gemtastic brings us down into the depths of an ancient giant cavern filled with gems and tasks us with finding the best and biggest combinations. Beautiful gems adorn this playing field while multipliers and re-spins dominate the gameplay.

The game has a 6-reel, 5-row playing field with a total of 30 paylines which might seem low compared to the larger screen. However, the addition of cascading reels means that players will get multiple opportunities to collect wins. The game was developed and released in 2019 by Red Tiger.

I thought the game looked acceptable considering the limited possibilities coupled with the setting. The cave in the background looked vast and mysterious, steeped in dark blues with the shine of gems stuck in the rocks. Meanwhile, the reels were filled with simple but colourful gems that looked different enough to easily differentiate.

Gemtastic doesn’t get away from the base game, incorporating all features into the main screen and offering no distractions in the form of free spins or a bonus game. This was not a detriment, in my opinion, considering the features are interesting and obvious enough to fit into the base game.

The sound in this slot is space-sounding with a lot of electronic beeping and jingling. Wins are emphasised by a loud and ramping beat that makes it a little too obvious you got a win. Considering the cascading feature it can also become quite overbearing.

All of the symbols in Gemtastic are different variations of gems. There are quite a few of them, resulting in the High Volatility it is listed as. That doesn’t mean wins are necessarily spaced out a lot, but a single winning payline is not enough to compensate for the cost of a spin. The game very much depends on multiple winning paylines in a row, coupled with the ever-increasing multiplier. If you don’t get those together, the wins are going to be too low.

Gemtastic doesn’t have too many features but since they work together, it’s likely you’ll see these features activate almost every spin. This can result in a very big win or only a tiny win. This facilitates the high volatility, with high risk and high reward gameplay that’s only for players that enjoy this type of slot.

In Gemtastic, every spin is basically its own game. In the best-case scenario, a single spin will result in a dozen re-spins, increasing the multiplier with every re-spin and creating bigger and bigger wins. In reality, this will only happen very rarely.

During my time playing a single win per spin was quite likely. The multiplier would increase to 2x, a re-spin was triggered and that was it. There was no second win, the multiplier would reset and the game would spin as normal. This could happen multiple times in a row, or there would be no win at all.

If we take this as the standard gameplay over a longer time it should become clear why the game has high volatility. There aren’t enough regular wins to compensate the spending required to keep the wheels spinning. As a player, you become very dependent on the occasional times where the multiplier keeps increasing and the re-spins keep triggering wins. If that doesn’t happen, we see a steady decline in our funds.

I found that the colossal symbols don’t appear enough to be considered a part of the slot in any meaningful way. The 2x2 symbols might appear a little more often but since it requires at least 3 symbols to trigger a win, those are often not enough to do anything.

Gemtastic is a simple but nice-looking slot which has embraced its setting fully. There are no card symbols here, everything is made out of gems. The gameplay has a very short loop that can result in some tremendous wins if the stars align but unfortunately they almost never do.

I had a good time playing but I had to stop because I simply ran out of coins. There was no real upward trend at any point and even big wins only helped to compensate for my losses. They didn’t put me in the positive. I find this game to be a slot for players that enjoy a relaxing if slightly modern gameplay experience, and aren’t overly concerned with big wins.

That said, the potential win is a massive 10,000x your bet so it is possible this might be a very beneficial slot. I would simply not expect it to pay out in any way even close to that maximum win.

Browse casinos with Gemtastic and other slots from Red Tiger. Create an account and try the game for free before making a deposit.

You can play Gemtastic in English, Finnish, Swedish, German and 18 other languages. 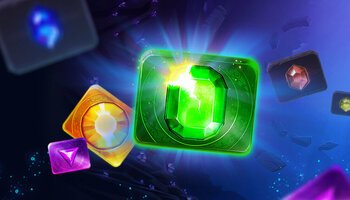