Genies Touch takes place in the land of 1001 Arabian Nights, where the beautiful genie helps the player in getting bigger paylines and thus bigger wins!

As a slot that came out in 2016, released by developer Quickspin, the game still looks great. The images are sharp, the drawings are very characterful and the background shows us deep in the heartland of an Arabian empire. The different symbols are easily distinguishable and the game plays well.

A 5-reel, 3-row playing field with 20 paylines means it stays close to the basic slot layout. The gameplay itself also fits the classic slot experience. I found the game very easy to get into, with only 1 feature that required me to do some research but the rest being immediately obvious.

The game looks great, especially the different characters. They are drawn in a style that reminds me of some popular animated movies from a while ago, with the same sense of realism. Everything is clearly distinguishable due to the bright colours used.

The music might be a little derivative considering the setting but everything sounds clear and sharp, fitting the theme and creating a very pleasing atmosphere. I also liked how the winning sounds are a little more elaborate than the usual short jingle that most other slots have.

Genies Touch employs a collection of original symbols, divided between high- and low-paying ones. The high-paying symbols are the different characters, all beautifully drawn as well as slightly animated when part of a winning payline. Meanwhile, the low-paying symbols are represented by differently shared and coloured gems which are unfortunately not animated.

The symbols are easily distinguishable. Unfortunately, the gems are rather bland. I did like the animation of the Magic Lamps when the Genies Touch feature activated, swirling mist around the different symbols.

This slot doesn’t have a lot of features, but the Genies Touch and Free Spins mode both showed up frequently enough to have a real impact on the gameplay. With the Medium Volatility, it meant a rather steady trickle of moderate wins although there were some big spikes when the Free Spins were especially favourable.

In general, the free spins and wilds features are very simple and familiar to all players. The Wilds show up frequently enough to help out with winning paylines but don’t go out of their way to create anything big. Meanwhile, I was surprised by how often the Free Spins mode showed up. I would semi-regularly trigger them which helped in keeping my funds up.

The Genies Touch feature was the most interesting part of the game. Whenever three Magic Lamps appear on the screen, the game pauses and each Magic Lamp spews out some swirling mist. Each Magic Lamp then converts a neighbouring symbol into a random different symbol. Once all 3 Lamps have done this, the new random symbol that will pay out the biggest win is chosen and all involved symbols including the Magic Lamps are turned into that symbol.

This meant at least 6 pieces would be the same symbol, guaranteeing a win. This symbol could even be a Wild, creating even bigger wins! Although the Free Spins mode operates like normal, it did make it more likely Magic Lamps would appear. I’ll let you imagine how big this could make the wins.

Genies Touch is a rather basic slot when it comes to its features and gameplay but a very solid, enjoyable gameplay experience. The game looks pretty, has plenty of animations as well as a really nice style. It’s not the most original slot but it doesn’t have to be, to be good.

The game lets you pick a bet between £0.10 and £100 per spin, which makes it possible to pick something that you’re comfortable in combination with the medium volatility. Even though it had frequent high payouts for me, the max. win is 250x your bet which is quite disappointingly low.

The Arabian Nights setting is quite popular among developers. Some of the best-known examples include Arabian Nights by NetEnt, Aladdin and the Sorcerer by Pragmatic Play and Sultan’s Gold Slot by PlayTech. I think Genies Touch deviates enough from the regular theme to give it its own style and appearance while keeping close to the classic elements of the setting.

If you’re a player that enjoys pretty but simple slots with some meaningful features I would definitely recommend Genies Touch. Even though the max. win is very low I think the game has a regular enough supply of wins to compensate for that.

Browse casinos with Genies Touch and other slots from Quickspin. Create an account and try the game for free before making a deposit.

You can play Genies Touch in English, Finnish, Swedish, Russian and 4 other languages. 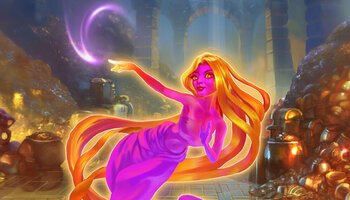