Get the Gold Infinireels™ slot review

Play Get the Gold Infinireels™

Get The Gold Infinireels brings back the more classic style of slot but with a certain twist. Players find themselves standing on the shore of a river trying to sift gold out of the sand. The game further features a bonus game and multipliers.

This game was developed by Red Tiger and came out in 2022, making it one of their newest releases. The game makes use of a very strong aesthetic by going for the old gold rush look. Players find themselves literally looking into the river where they attempt to find gold nuggets in the rushing water. Although this feels like a very simple idea, the way it’s implemented helps elevate the game.

The playing field has a 3-row, 3-reel playing field but this can expand infinitely by adding more reels to the game. This depends on specific features triggering which I will cover more later. Normally, there are between 1 and 1,000,000 (theoretical) paylines. This number fluctuates constantly as rows are added or disappear.

When it comes to the design, the graphics are clear and unique. My biggest note here is that they aren’t particularly original. The art is nice but the design isn’t special. Perhaps using a different kind of shading or colouring could have given it some more personality. That said, everything does fit the narrative excellently.

Get The Gold Infinireels never forgets the setting and this translates in the symbols. All of them are originally created for the game. Low-paying symbols are displayed by various items one can find in the river. The high-paying symbols are associated with finding gold, or the actual gold itself. It was a bit of a shame that the symbols themselves aren’t really animated but it does fit the more classic style of the slot.

Players who play this game will notice the High Volatility almost immediately. Spins will only rarely award any win. Even when they do, the payouts are often quite low. With an RTP of 95.72%, it’s actually quite a lot lower than the average. As such, I found my funds to drain quite rapidly as I played.

As usual, players do have the option to change their bets to deal with this somewhat. It’s possible to pick a bet between £0.20 and £100 per spin. While this will allow normal players to play for longer with small bets, it gives high rollers the opportunity to try and benefit from its high volatility. Besides that, the game comes with a jackpot of 10,000x your bet.

Get The Gold Infinireels looks like a generic classic slot at first glance. It does hide several features that add more modern gameplay elements to the experience.

A quick list of the features to start with:

In this game, the base game is practically useless except for getting to the Gold Rush. Payouts for wins in this part of the slot are extremely low. Even so, they are not common and I would sometimes not get any wins for a dozen spins. Players will immediately notice their funds starting to drain.

The Gold Rush can compensate for this but it doesn’t always manage to. Getting it to activate isn’t the hardest part. Although it’s not exactly a common occurrence I did have it happen multiple times over my time playing. When it happens, the gameplay changes. The game will no longer count the regular symbols as wins, even when they appear on a payline.

Instead, the slot looks for Scatters. These trigger the Gold Rush but also appear during this special mode. Scatters have a value on them. During the Gold Rush, these are added to a total coin win. As long as at least one Scatter is on the screen, new reels are added to the right side of the screen. Every time a Scatter is added, their value is added to the total coin win. Should the bonus game have no more Scatters on the screen, the coin win is awarded to the player.

Get The Gold Infinireels is a game that looks like a rather simple classic slot at first glance. The base game also feels very basic, with no features to speak of that help the player. Really the only way to benefit from the game is to activate the Gold Rush feature.

Once a player does this, the game opens up somewhat with the special infinireels feature and the Double and Triple scatters. Unfortunately, this means the game has a somewhat split personality. Players that enjoy classic slots will likely be turned away by the special game mode. Meanwhile, more modern players will not get much enjoyment out of the base game.

It’s a shame considering the quick pace and the relative ease of the slot that it will probably split the player base. People will likely either only appreciate the base game or the Gold Rush and not both. That said, the nice size jackpot, as well as the frequent coin wins, might still be enough for players to give it a try. I found the Gold Rush to be fun but the payouts in the base game are very low.

Play Get the Gold Infinireels™ for free

Browse casinos with Get the Gold Infinireels™ and other slots from Red Tiger. Create an account and try the game for free before making a deposit.

You can play Get the Gold Infinireels™ in English, Finnish, Swedish, German and 18 other languages.

Get the Gold Infinireels™ supports GBP, EUR, SEK, NOK and 7 other currencies. 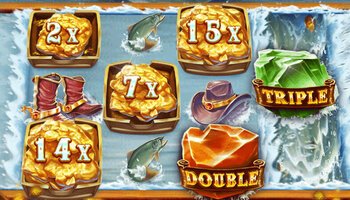