Ghost Glyph is set at a haunted mansion where a selection of crazy, whimsical ghosts are causing a ruckus and keeping the visitors up. Players that dare visit this old building will be confronted with free spins, non-standard reels and colossal symbols.

This game with its 7x7 playing field was developed by Quickspin and released as recently as 2020, showing off their high fidelity graphics in the process. Even though the playing field only gives minimal room to the different symbols, it does offer a lot for players to see. The background gives us a topdown view of the outside garden with the reels projected on the ground. If we activate the free spins mode, we are moved into the main hallway where the reels are shown on the carpet.

All of the symbols are uniquely made for this game, even though they aren’t terribly original. Considering the limited space I think the designers did a good job. As the game makes use of a cascading reels mechanic, there is plenty of movement from itself but even that is augmented by having different ghosts appear on the screen to grant different boons.

Not to be left behind, the sound design department also went all out to make their mark on this slot. Ghost Glyph features some suitably spooky sounds as well as a classic haunted mansion song playing in the background. All in all, the developers did an excellent job of keeping the player immersed.

The symbols in Ghost Glyph are all tiny, but because of their unique design and distinct colours, it’s still possible to keep them apart. Wins are highlighted before the tiles disappear and are replaced through the cascading reels mechanic.

Players can pick a bet between £0.20 and £100 per spin, giving them some room to decide how close to the edge they want to play it. Considering this slot has High Volatility, most players will probably want to bet a lower amount since there can be quite some time between two wins. Betting too high can drain your funds before this win comes along. Even then, it’s not guaranteed to be big enough to make back any losses.

The prospect of a max. win of 2,260x your bet is an appealing element that might persuade some players to keep players a little longer than they intended. That said, although I had some bigger wins I never felt like I was close to hitting this jackpot.

The payouts are very small as most of the clusters will be only five symbols large, the minimum size to count as a win. Most symbols won’t even make back a single spin like this, requiring the player to either get bigger clusters or higher-paying symbols in a cluster.

Most of the features in Ghost Glyph are familiar to many players, but they are gated through the cascading reels mechanic. First a quick overview of these:

The game fully depends on getting consecutive wins on a single reel in order to activate any of its features. Every win leaves behind little orbs that float to the top of the screen and empower the Ghost Urns which house 4 different types of ghosts:

The ghosts are triggered in random order that is shown at the top of the screen. The last ghost is always a Blue Ghost.

Ghost Glyph is a pretty looking slot with a lot of details that will keep players engaged and interested in what is happening on the screen. The graphics are great and the sound does a good job at adding to the setting.

Players that want to give this slot a try should be comfortable with non-standard reels or at least willing to give them a try as this game does not resemble most classic video slots. The mechanics being used aren’t overly original in their own right but they aren’t as popular as normal paylines.

Keep the volatility of the game in check as its cartoony look and occasional smaller win might fool you into thinking you’re doing quite well when in fact you’re losing coins. At the same time, players can be a single spin away from getting a bigger win that makes up for all the spins up to that point.

Browse casinos with Ghost Glyph and other slots from Quickspin. Create an account and try the game for free before making a deposit.

You can play Ghost Glyph in English, Finnish, Swedish, German and 24 other languages. 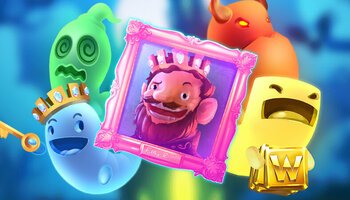