Giovanni's Gems is a slot game where coals don’t require aeons to become diamonds. And since every piece of coal inside the earth is a diamond in the making, the game can reward hefty prizes with the help of those symbols.

If you decide to play Giovanni’s Gems, a forest-dwelling elf will keep you company on the side of the screen and celebrate the winnings with you. It’s a charming little touch in terms of graphic design. But, what defines the gameplay are two extra features and the cascading wins system of payouts.

Even though it doesn’t quite match slots like Reactoons or Aloha Cluster Pays in pep and dynamic, the gameplay can become pretty exciting. I especially like the fact that a high-pay potential of 6,666x your bet is paired with a medium volatility model and RTP of 94.94%.

This makes Giovanni’s Gems a grid-based slot that can show the best of its cascading wins magic on a regular basis. I was able to get multiple winning outcomes in a row from the same spin without having to wait too long. The diamond symbols were nearly inevitable as part of those sequences.

Come to think of it, I realized that Giovanni’s Gems has somehow slipped under the radar in its category, but I was pretty glad for having discovered it.

The premise makes it apparent that we are in a storied forest which is Giovanni's favourite place to lurk for precious stones. On first impression I didn't see much pep in the design, considering the lack of animation when the grid is still. However, I like the lighting and the contrast between the symbols and the background.

Once I stopped paying attention to the details I realized that the game can get quite dynamic. Giovanni's Gems is all about the cascading wins, which causes the gems and the other symbols to crackle and pop out of existence and make room for new symbols to drop.

As for the music, the background track is rather charming and I am certain it had been performed by professional musicians. One thing I didn't like in this respect is the sound effect that comes with every spin, but thankfully it can be turned off from the settings menu.

As I said above, the game doesn't come with a Wild symbol and to be quite sincere, I don't even mind that there isn't one. The cluster payouts can clump together between five and 25 diamonds, so there is plenty of room for winning outcomes to land across the entire 7x7 board.

There are two extra features that can complement the gameplay. Giovanni’s Gems comes with a free spins bonus and a nifty modifier that can increase your potential winnings.

Giovanni’s symbol is the bonus and you need at least five of his symbols anywhere on the grid to trigger between seven and 50 spins. The latter figure comes with 25 Giovannis which is a tad on the virtually impossible end of things. But, since this is listed as a possible outcome, then sure, I'll take 50 spins if the game decides to treat me to it.

Besides awarding free spins, a cluster of bonus symbols can pay between £0.09 and £9.00 if the bet that triggered it is £0.90. I had this feature trigger twice inside 100 spins and noticed that the volatility lets up and tends to create at least one good cascade. This is definitely one of the big pluses for the game.

This is the name of the reel modifier that takes a lump of coal and turns it into a diamond, if that symbol is adjacent to any other that forms a winning cluster. The more coal symbols there are as part of the cluster, the bigger the prize. Which makes me think - there may not be a standard Wild symbol but this feature can definitely fill that void.

The way to the mine starts with hitting the Spin button. Each spin sets off the so-called symbol 'drop' on a grid of seven horizontal and seven vertical rows. Bets have a range between 30p and £150.00 per spin.

To land a winning outcome, you need to get matching coals, diamonds, crystals, or mining implements. The diamond symbol doesn’t need to be part of a cluster in order to pay, which is one of the strong sides of Giovanni’s Gems.

The payout structure is as follows for wagers of £0.90:

I think that Giovanni's Gems is a decent game. Even though I didn't find the payout structure overly exciting, the symbol drop mechanic can keep adding to the winning outcome and even surprise you by throwing some diamonds on the screen.

Anyone who has enjoyed games like Reactoonz and similar grid-based slots can find the present game enjoyable. The slower pace definitely suits me and I like the fact that it’s made by Betsoft.

Overall, Giovanni’s Gems gets a high mark from me because of the free spins bonus, which isn’t just a base game that has the label ‘Bonus’. Also, the diamonds can pay for just a single symbol and their occurrence isn’t exceedingly rare.

Browse casinos with Giovanni's Gems and other slots from Betsoft. Create an account and try the game for free before making a deposit.

You can play Giovanni's Gems in English, Finnish, Swedish, German and 22 other languages. 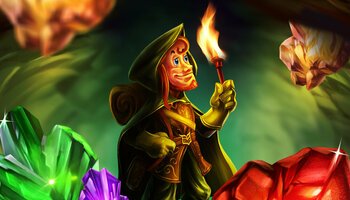