Gladiator takes a look at an exciting time in history when the Roman Empire was at its height and people fought for the masses as entertainment. This Betsoft slot takes the setting as inspiration for a game with free spins, a bonus game and multiplier wilds.

Released in 2011, the game is showing its age by now as the 3D graphics that were used have gone out of fashion. Even so, the symbols all look rather flat and their textures underdeveloped but everything is sharp and most symbols don’t look too similar. Filling up the 5-reel, 3-row playing field with unique art does help at setting this slot apart from competitors. There aren’t many animations, unfortunately, which I think could have helped it feel a bit more alive.

The symbols are all based on the subject matter and will give people a good opportunity to feel more immersed. There are different characters that are likely the gladiators while the lower-paying symbols are based on random items you could find in the colosseum. When there’s a win on one of the 30 paylines it will light up the winning tiles as well as show the total amount won.

There isn’t a background to see as the playing field fills up the entire screen which I think could have been used to help with the setting a bit more. Activating the coin win game or the free spins mode also doesn't change the appearance of the slot a lot, keeping the same symbols and the normal playing field on the screen. The only massive exception is the bonus game, which shows us a fighting-game style fight between two gladiators.

Gladiator has a lot of inspiration to draw from, and it makes good use of it. Even though the appearance of the symbols is starting to look outdated, there is some creativity on display. The stacked Wilds appear on the screen with a gladiator walking across the playing field and hacking away at the marble. Even though it looks like a fighting game from the 1990s it still offers some much-needed animation.

The gameplay is based around its Medium Volatility which expresses itself through infrequent but decent wins. Players should expect to have to spin for quite a while to see a win, but the payouts are usually decent enough to keep your funds at least somewhat stable. However, over a longer period of time, you will need larger wins to compensate for your spins. I found that I lost almost half my funds after about an hour with no real way to get them back.

To deal with this, the game allows players to pick a bet between £0.02 and £150 per spin. This gives people the chance to either reduce the risk and speed at which they lose their coins or to pick a higher bet to increase the size of their wins. As an aside, players can also win a jackpot which is a maximum win of 400x your bet. It’s pretty small compared to other slots, especially considering the volatility.

When you play the game, you will encounter the following symbols:

Gladiator may seem like a standard slot and it is in many ways, but it also adds some interesting features:

For a classic slot, it will pause the regular gameplay often to play one of the bonus features. This might annoy some players but I found it to be pretty entertaining and prevented me from getting bored. It is also the best moment in the game to get any sizable coin wins. I found the coin game to trigger the most often, then the free spins mode and finally the bonus game.

Gladiator is an interesting look at how the slightly older slots still hold up. Even though the graphics aren’t the greatest anymore and don’t really compare to the newer hand-drawn art, it still offers a lot of personality to the game. The setting is really solidified through the use of the graphics as well as the unique symbols.

When it comes to the gameplay, I think most players that expect a classic slot with maybe some free spins will be surprised. The game takes us away from the standard gameplay quite often, requiring the player to pick a favourite gladiator or to choose from a series of doors. If you prefer uninterrupted spins this might be too much distraction.

As far as my experience went, I had a good time playing it but my funds went down and never stopped dropping. Even with medium volatility, the slot did not feel like it was very rewarding and even the bonus games were not enough to recover my losses. Keep that in mind when you give this game a try.

Browse casinos with Gladiator and other slots from Betsoft. Create an account and try the game for free before making a deposit.

You can play Gladiator in English, Finnish, Swedish, German and 21 other languages. 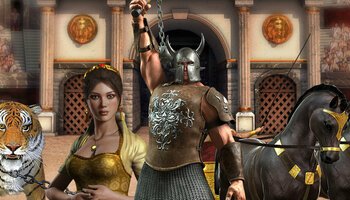