Gladiators is a slot that is about the classic gladiatorial battles that took place during the Roman Empire but with a unique twist. Instead of having the battles fought by people, there are different types of fish who fight it out in the ring!

The game was released back in 2014 by developer Endorphina and the age is starting to show somewhat. The graphics still look sharp but the art is a little odd, and I don’t just mean the fish gladiators. The 5-reel, 3-row playing field gives a lot of room to show off the different symbols. The background shows what appears to be a sunken colosseum that is probably used by the fighting fish.

All the symbols in the game have some animations when they’re part of a win, although not all of them made much sense. Some of the card letters have seaweed that turns into weapons, which I didn’t quite understand. The fish do have some nice animations, swinging their weapons for example.

The sound-design was quite good with a rousing battle song playing in the background most of the time. Wins were celebrated with a short trumpet call. When the free spins mode starts the music fades away briefly before coming back. Unlike other slots, the music is the same here as in the base game.

Gladiators uses symbols that are somehow related to the setting. The high-paying symbols are different types of fish, either armed with something, using a chariot or chained like attack dogs. The low-paying card letters are a lot less inspired with only differently coloured seaweed to link them to the theme.

Players can win along 21 paylines that run from left to right. The game has quite a few different symbols which give the slot a High Volatility. I found the game to be alright at handing out wins however, making it feel like it was more on medium volatility. That could just have been my experience though.

The symbols in Gladiators are:

Gladiators doesn’t have too many features but I thought the ones that are included are interesting and fun enough. They all had their part to play during the game, even though not all of them felt like a really important part of getting wins.

The base game is rather simple with only the Wilds adjusting the gameplay at all. The slot doesn’t give out too many of these although it is possible to get 2 or more on the screen at the same time, which can result in a bigger win.

The high volatility comes out during the base game as the wins are few and far between. To offset this somewhat, the free spins mode triggers relatively often as well. When that happens, players receive between 10 and 50 free spins depending on the number of Bonus symbols on the screen.

In many regards, the free spins mode plays the same way as the base game. Wilds appear about as frequently here. There is a 2x multiplier to all wins which helped increase the total coin win but it was not helpful in actually getting wins.

The most interesting aspect was the Laurel mechanic. Every spin, the high-paying symbol that appears on the screen the most is the winner. Each tile with this symbol gets a laurel and counts as a Wild the next spin. The next spin then selects a new winner. If the winner is present on the location of a laurel it sticks, otherwise it disappears.

Even though this sounds pretty complicated, it comes down to getting between 1 and 5 random wilds on the screen every spin, plus the normal Wilds that appear. This makes it more likely the game can create a winning bet line.

I haven’t had any free spins mode with more than 10 free spins as 3 symbols on the screen was the max. I did get some extra free spins during the mode however since that’s also possible.

All in all, the features are alright but don’t feel particularly interesting. They are the reason for the high volatility as the free spins mode is the only real opportunity the player has at getting back their coins.

Gladiators is a unique concept and some fun art put into an average slot. The graphics are nice with some clear animations, the sounds are somewhat fitting although I had expected more ocean sounds considering the setting. The gameplay is exactly what you’d expect from a standard slot.

Players that want to play something casual and rather amusing without having to do too much thinking will probably enjoy Gladiators. The features are extremely simple with only the Laurel mechanic being somewhat unique. At the same time, I feel like they could have just made it a Sticky Wilds mechanic for the same effect.

Players can pick a bet between £0.01 and £210 which is a pretty extreme range, meaning they can precisely choose what they’re comfortable with. The max. win is 3,000x your bet, which I would consider quite respectable.

Browse casinos with Gladiators and other slots from Endorphina. Create an account and try the game for free before making a deposit.

You can play Gladiators in English 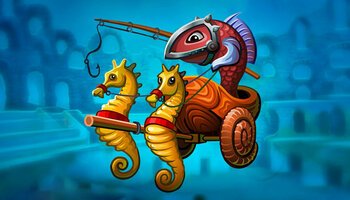