Glorious Rome brings to life the times of Ancient Rome where the city was at the top of its power. The game not only features great graphics, but you’ll also find the slot includes Free Spins, Scatters and Wilds.

This game was released by Pragmatic Play in 2015, showing off some excellent graphics and interesting if simple features. The slot is built around the standard 5-reel, 3-row playing field with 20 paylines, creating a type of gameplay that will be familiar to most players that have played any games before.

Glorious Rome uses familiar images to fill the reels, creating all-original symbols that portray elements of Roman culture and society. I thought these drawings all look very good, drawn in a highly-realistic style with some animations to make things feel more alive. The background is portrayed as a classical temple with marble statues and pillars framing the playing field.

When it comes to the music, we’re treated to a rather intimidating drumroll when the reels spin as if boulders are being pushed into place. The sound effects are more muted, with simple jingles when there are wins. If you’re not spinning the reels you’ll hear the sounds of a busy street in a city, bringing the idea of standing in Rome a little closer.

The symbols in Glorious Rome are all original and made to represent different elements of Roman society. I’m not a history buff but it is interesting to see different gladiator types to appear, for example.

You’ll find the following symbols in the game, ranging from highest to lowest:

Even though the game has big payouts for bigger wins, the game still only has Medium Volatility. In my experience, wins weren’t exactly easy to come by but due to the larger payouts, they would compensate for a bigger number of spins. Players can pick a bet between £0.20 and £125 per spin. A max. win of 1,000x your bet seems quite low compared to the volatility but you can expect bigger normal wins while you play.

Glorious Rome does not put a lot of effort into its features. That doesn’t mean the features are ineffective or bad, but they operate exactly as we’d expect them to, and there aren’t a lot of them either.

During the base game, the Wilds are really the only feature to pay attention to as the Scatters are extremely rare. I only activated the Free Spins mode a total of 2 times during my time playing, which makes it almost not worth the time. The Wilds can appear on their own or filling a reel, but that is mostly coincidental and not a special feature.

When the Free Spins mode does activate, it will select a random symbol to act as a Scatter. During the Free Spins mode, this symbol will count towards a win even when they don’t appear on a payline. Instead, the symbol just has to appear anywhere on the screen often enough to trigger a win.

I found this feature to be a nice addition but it was ultimately not very useful. The times I did activate this mode the wins were rarely more than 10x my bet, which was not enough to compensate for the number of spins I needed to even get into this mode. As a result, my funds slowly declined as I played.

The features felt alright but did not play a big role in the gameplay, making the game feel like a very standard slot that is only occasionally spiced up with some basic features. If you’re a player that enjoys the classic gameplay this might be a boon, but most players will probably want something more interesting.

Glorious Rome is a slot that looks amazing even though it’s getting older, but unfortunately, there is little to back up that visual prowess. Besides the graphics, there really isn’t a lot to comment on, as the features are especially simple if they even appear at all.

The gameplay is very simple and also feels that way. Where other games make it seem a bit more interesting than it is by introducing special animations or separate bonus games, Glorious Rome does none of that. Wilds just appear and vanish, Free Spins are introduced with the random symbol selection and then plays like the regular game.

All of this causes the game to feel forgetful. Its nice graphics aren’t unique or pretty enough to really save it from mediocrity and I am afraid a lot of players simply won’t enjoy the gameplay enough to come back to it. Give it a try if you’re interested in Ancient Rome, otherwise, you’re probably fine with giving it a pass.

Browse casinos with Glorious Rome™ and other slots from Pragmatic Play. Create an account and try the game for free before making a deposit.

You can play Glorious Rome™ in English, Finnish, Swedish, German and 17 other languages. 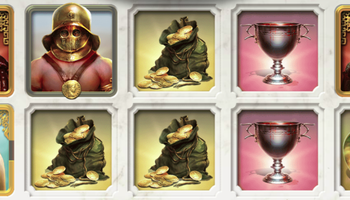