Go Bananas! gives us a band of mischievous monkeys to try and keep under control as they bury us in Wilds and bananas! Even now this game still looks gorgeous and puts newer games to shame.

If you hadn’t guessed by now, Go Bananas! takes place in the depth of a tropical jungle where we’re watching a bunch of monkeys pick out their favourite fruits and helping us out with a whole flurry of different wilds. It is based on a classic 5-reel, 3-row and 20-payline game so I didn’t have any problem getting into it.

Released in 2014 you’ll be forgiven for thinking it would have started to show its age, but the opposite is true. Go Bananas! by Netent looks absolutely gorgeous, with sharp images, excellent character design, a whole bunch of unique animations and a suitable soundtrack.

That last one isn’t a visual aspect obviously but still deserves special mention. It gives the game a real jungle vibe, listening to bongo music spiced up with a variety of other instruments. If you get any of the monkey Wilds, they’ll even pop up and make their own little sound. It all did a great job of getting me in the mood.

Even though I’ve played this slot regularly since it was released I continue to be blown away by the graphics. On my widescreen monitor, the graphics are still sharp and everything looks amazing. The colours are lush, the design of the symbols is original and even the background works to keep me in the mood.

As I’m sure we all expect from Netent the symbols in the game look the part, fitting the theme perfectly and are heavily detailed. An important difference from most other slots is that the special symbols are the monkeys but instead of giving wins, they place Wilds in a certain way.

As I mentioned before the symbols look absolutely amazing. I don’t know how they did it but the Netent artists managed to make even the coconut look cute. The different monkeys are great as well, each of them oozing personality.

Go Bananas! is a Low Volatility slot which translates in a frequent stream of lower-paying wins. I normally don’t enjoy this level of volatility as much as medium volatility because it doesn’t give itself any time to build up any tension. I forgive this slot for it though, because the wins aren’t even that low! In fact, just getting the right 2 monkeys at the same time can fill your playing field almost completely with wilds.

As you could probably tell from the listed Symbols, Go Bananas! doesn’t just use 1 Wild symbol but 5 different ones. Each monkey in the game has its own pattern of Wilds it spawns. They don’t have any value themselves but obviously help a lot in creating paylines for the other symbols.

There are no other features to speak of, except the ones that make the gameplay a little easier: Autoplay and Quick Spin. With 5 different types of Wilds, the main and only way of getting wins is by just getting symbols on a payline.

I think this works well. The monkeys don’t show up every spin but you’ll see them appear regularly. When they do, depending on the type of monkey, it’ll have a bigger or smaller benefit depending on which reel they appear on.

Ever so often you’ll get 2 monkeys at the same time, which can quickly fill up the screen with Wilds. It’s not something you need to hold out for, but it’s very nice when it happens!

Netent doesn’t shy away from trying new things and I think it paid off well in Go Bananas! By going with less, not more, they make the game easily accessible while still staying very engaging and continuously fun.

Go Bananas! is another game in a long line of games set in the jungle. Netent itself released Jungle Spirit: Call of the Wild in 2017. Even though that game is newer I think it doesn’t hold a candle to Go Bananas! more unique and fun design. Meanwhile, there’s Yggdrasil’s Jungle Books which looks amazing but throws a lot of different features at you that players who enjoy a classic experience might not like.

I fell in love with Go Bananas! when it came out all those years ago and I still find myself drawn to it regularly. It gives me a great sense of joy to watch the different monkeys leap and stomp around the screen, each with their own character and look. Not only that, but they also have unique animations that liven up the game.

The lack of features is actually a real breath of fresh air to me, with many slots thinking that adding a lot of them makes the game better. In general, I do think it can work out that way but it’s a fine line to walk. As Go Bananas! shows, it’s not even always true. Less is more, indeed.

Browse casinos with Go Bananas! and other slots from NetEnt. Create an account and try the game for free before making a deposit.

You can play Go Bananas! in English, Finnish, Swedish, German and 20 other languages. 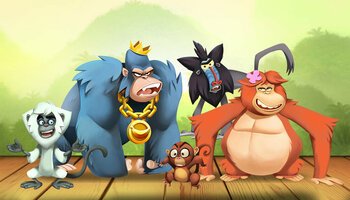