Goblins & Gemstones is a game that is set in the inner workings of goblin society where they work hard to ensure their gold and gemstones are safe in their underground vaults. Players get a peek at their treasures alongside free spins, scatter symbols and wilds.

Developed by Kalamba Games and released in 2020, this slot will likely have flown under the radar for a lot of people. Which is a shame really, since it offers some interesting gameplay elements and looks quite good too! The slot is built on a 5-reel, 4-row playing field with an impressive 1,024 paylines. Everything in the game is made to fit the theme of the goblins, although it still uses classic card letters to fill the reels.

If you’re a fan of fantasy-themed slots then you’ll be glad to know this game relishes in the setting as it makes sure all aspects are made to fit. The background shows us an enormous vault that is littered with gold coins. The playing field consists of various goblins who look like accountants, keeping track of their riches. There are also some other random objects you would find in a place like this.

I thought the only real disappointment when it comes to its appearance was the lack of animations. It’s not something that brings the entire slot down, it’s more that animations would have added some more life to the slot. The characters for example are completely static and don’t move around as much as I would have liked to see.

Goblins & Gemstones uses a wide variety of symbols, ranging from the high-paying characters to the medium-paying items to the low-paying card letters. This variety does help in making it clear how close you are to a bigger or smaller win but the pace can be quite high. In that case, it’s nice that any win has the tiles light up and the payline showing as the total coin win is put on the screen.

When it comes to winning, expect it to be quite a struggle. The game comes with High Volatility which means you won’t win all that often. To compensate for this, getting a win will usually be enough to make back at least a few spins, although even that isn’t a guarantee. As I tested the slot I found my funds to be pretty stable and I never suffered from a continuous loss streak. Obviously, though, that’s not a guarantee.

Players can deal with the volatility by adjusting their bets per spin. The game allows this by picking a bet between £0.50 and £50 per spin. I actually found their lowest bet to be quite high compared to other slots, who would allow players to go as low as £0.01 per spin. Still, it should be low enough to get a good number of spins in, regardless of your budget.

There are plenty of symbols in the game, including:

Goblins & Gemstones has a number of features that are activated by just playing the game. These features can have a bigger or smaller impact on the game itself as well as the likelihood of a win. There is also the free spins mode which lets you choose which feature you want to activate.

The features you’ll find in the game are:

There are 3 trackers on the screen that will show how many coloured gems you have collected. Once a tracker is filled, that special feature is activated for a number of spins. When the free spins mode is triggered, the player gets to pick which 1 of the 3 special features they want to use. I found the Paired Reels to be the most beneficial for me but this might obviously have different results for you.

Goblins & Gemstones is a pretty slot to look at with a nice amount of character and detail. I wish there had been a bit more to see in the animations department but as a smaller studio that would have been difficult for Kalamba Games to accomplish.

The features offer some exciting gameplay which is improved by the ability to activate these features during the base game by simply playing for long enough. If they had only appeared during the free spins mode, I’m afraid it wouldn’t have been interesting enough.

Meanwhile, the game doesn’t stray too far from the regular gameplay which means it will likely appeal to most classic slot players. The max. win of 38,890x your bet finally is an excellent incentive for power players to give this game a try.

Browse casinos with Goblins & Gemstones and other slots from Kalamba Games. Create an account and try the game for free before making a deposit.

You can play Goblins & Gemstones in English, Finnish, Swedish, German and 9 other languages. 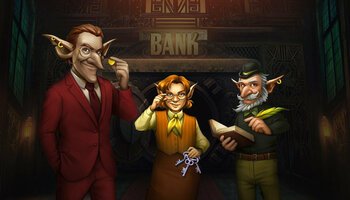