God Of Wealth is set in the clouds where we’re surrounded by piles of gold coins and the God of Wealth as we see if we can appease them to let us have some of that wealth!

This rather unique slot was developed by Red Tiger and released in 2016, showing off a beautifully themed playing field and a fully animated character standing to the side. If this is the eponymous God of Wealth is never made clear but considering his influence on the gameplay I’d say that he is!

The game comes with a standard 5-reel, 3-row playing field and a regular 20 paylines. God of Wealth doesn’t add any surprises in that area as the slot largely plays as you’d expect. The graphics look good with sharp images and an animated character. The background shows us a wide plain of clouds with stacks of gold coins on them.

When it comes to music, this game shies away from the standard Asian music you might expect considering the theme. There are some tones that reminded me of it but in general, the music stayed rather light and original. Only big wins would trigger a short Chinese sounding tune with a harp. I considered it a step in the right direction nonetheless.

The symbols in God of Wealth look attractive without being overly original. Some of the symbols can be found in their other slot Chinese Treasures as well and might have been direct copies. It’s too bad because it looks fine. The low-paying symbols are simple high cards, drawn in the painting style that’s also been used in several Red Tiger slots before.

The payouts per win aren’t too high considering the Medium Volatility which grants wins fairly regularly thanks to the special features. Still, I found that my funds tended to go up as I played although this isn’t going to be the case every time!

God of Wealth has a nice albeit a rather small collection of features that change up the experience a little. The features are:

As you can tell, there isn’t much here that will surprise experienced players. The random Wilds are an interesting feature during the base game that sometimes helped me get some sizeable wins. Since it’s a slot there are obviously no guarantees. I found that the base game stays relevant during play because of this, and I wasn’t just spinning the reels hoping for a Bonus Symbol or the Free Spins mode.

The Bonus Symbol meanwhile is an oddity. It’s not especially unique nor is it very complicated but it showed up so rarely that I occasionally forgot it was a feature in the game. When it does pop up the game stops and lets you pick 1 of 3 boxes. These each hold a certain multiplier. Some of the boxes have a multiplier as well as letting you pick another box. I suppose that if you pick correctly a few times in a row you can get to the maximum 138x multiplier in this mode because the boxes I picked only had multipliers between 3x and 15x my stake.

Although it was a nice extra bonus when it showed up, because it was so rare to see it pop up I wouldn’t consider it an important part of the gameplay experience. When it appears you’ll get a nice coin reward but it won’t help you hit the max. win of 1,109x your bet.

I did find it to often stop to add at least 3 and sometimes 6 Wilds to the screen, making wins very easy. Free Spins mode was because of this often rather beneficial and I was glad when it triggered.

In my opinion, the features that are part of God of Wealth aren’t too big or demanding but they did add a positive effect to the game. During my time playing, I rarely dropped below my starting funds and almost always managed to stay slightly above it. Of course, this was with picking on the lower end of the possible £0.10 to £80 bet per spin.

God of Wealth isn’t super special on the surface. The graphics are alright but very similar to other Red Tiger slots in the same setting. The animated God of Wealth is a nice addition who moves around occasionally when adding Random Wilds or presenting a big win. Other than that he’s not very active.

The features are a nice combination of dependable and original. The Bonus Symbols is a bit of an outlier here as it doesn’t appear often enough to feel like a part of the game, while the rewards it gives can be quite small to make it feel even more pointless. Nonetheless, the potential for a big win is appealing and some extra coins is never a bad thing!

The free spins mode is about as standard as it can be, if not for the Colossal Symbol. The symbol wouldn’t stop to fill the reels completely in my experience, but even just a single line would add 3 wilds and increased the likelihood of a big win.

Play God Of Wealth for free

Browse casinos with God Of Wealth and other slots from Red Tiger. Create an account and try the game for free before making a deposit.

You can play God Of Wealth in English, Finnish, Swedish, German and 18 other languages. 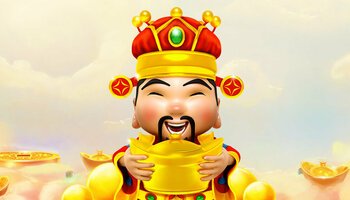