Gods of Gold: Infinireels brings us deep inside the hidden treasure vaults of some ancient Arabian king and sees us compete for an almost infinite amount of wealth!

Released by NetEnt in 2020, Gods of Gold: Infinireels is one of the latest and most modern slots added to their impressive games library. The slot is set in an undisclosed vault filled with endless piles of gold, reminding me of the story of Ali Baba. The sound design and different graphics also allude to something set in the Middle-East since it isn’t quite Egyptian nor does it have Indian vibes.

This slot has a 3-reel, 3-row playing field to start with but this can quickly expand to a potentially endless number of reels! Using the popular Ways to Win feature, any symbol appearing on consecutive reels will count as a win. Whenever there is such a win building, reels are added indefinitely for as long as that symbol keeps reappearing.

I found the graphics to be on par with what I’ve come to expect from NetEnt: original art, high quality and very detailed. The background is rather simple but it lets us know exactly what the setting is and where we are supposed to be. I liked how past the vast mountains of gold there was a tiny sliver of light to denote the door through which we entered.

The music is subtle and stays largely on the background but builds slowly as the reels expand to the side. Once I entered the Win Spins mode the music would pick up the pace a little more to accentuate the opportunity for big wins. All in all, I found it to be very much in line with the rest of the slot!

All the symbols in Gods of Gold: Infinireels are unique even though the low-paying symbols look like simple gems. Still, I’m not complaining. The symbols are unfortunately not animated when part of a win, but considering the amount of movement the game already has I think that’d been too much.

The game lists a High Volatility and I think that’s very accurate. Even though getting a win by itself wasn’t that difficult, the very low payout meant that I would need to get a considerable length payline to get my money’s worth. Even the Big Wins mode didn’t help with that very much.

Since Gods of Gold: Infinireels has a non-traditional playing field, it does have some more features that require explanation. First a quick overview:

I found the core gameplay of this slot to become evident mere moments after I started playing it. The game starts with a 3x3 playing field and a subsequent 27 paylines. As the reels spun, getting the same symbol on consecutive reels from left to right would add another reel to the right. If that reel also had that symbol on it, another reel would be added. This would continue until that symbol didn’t appear after which the total win was calculated and the playing field collapsed back to a 3x3 size.

That was about all there is to the biggest element in this game! The developers added some nice additions to the game to help keep an overview. Once a winning payline is hit, you’ll see a small counter to the right of the playing field that keeps track of which symbol is winning, how many symbols are in the payline and how many paylines are affected.

Meanwhile, on the bottom of the screen we can see a sort of minimalist treasure map that also keeps track of the results but instead shows us on which positions the winning symbols are and how long the payline is exactly. This can stretch to cover almost the entire screen!

One big thing to remember is that the longer the payline, the more beneficial it is. While a payline might start being worth mere cents, once it gets past 5 reels the value of the payline is doubled. This is also where the high volatility comes from since a three-of-a-kind win might only award £0.25, a seven-of-a-kind might already be up to £4 and an eight-of-a-kind turns that into £8. This continues exponentially as the payline gets longer.

Unfortunately, there really is no way to influence this so it’s a matter of sticking it out. I found the Win Spins mode to be underwhelming for this reason, since it has nothing specific added that makes a longer payline more likely. Even though a win is guaranteed, in my experience that would often be only 3 or 4 reels long which was before it became valuable. One time, with a bet of £0.20 per spin, I made £0.72 with 10 Win Spins.

Gods of Gold: Infinireels is a simpler slot than it might appear to be. The main feature is the infinitely added reels that can create some very long paylines, but most often you will be awarded short wins. Still, there is a thrill to see the reels grow and grow, knowing that they will also pay off in a similar way.

I wouldn’t say this game is for players that are big fans of traditional slots. If you’re someone who’s open for a more original take on the gameplay without expecting something revolutionary, I do think it will do a great job at keeping you entertained.

With the possibility to bet between £0.20 and £200 per spin the game can be very risky. A max. win of 25,000x your bet does make it look very appealing though! If you keep a close eye on your funds, maybe a portion of its vast vault of gold can be yours.

Browse casinos with Gods of Gold: Infinireels and other slots from NetEnt. Create an account and try the game for free before making a deposit.

You can play Gods of Gold: Infinireels in English, Finnish, Swedish, German and 20 other languages. 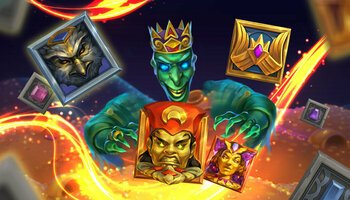