Gods of Rock! shows us a fantastic concert where a couple of the most famous gods in history throw an amazing show. Amidst screeching guitars and thumping drums players are entertained by cascading reels, multipliers and a free spins mode.

Thunderkick was the studio responsible for making this game which they released in 2021. The slot offers some excellent visuals with a lot of energy and detail. The graphics weren’t completely sharp on my desktop monitor but it looked a lot better on the smartphone. It’s clear this slot is optimized for players who prefer to play on the go.

The game features a 6-reel, 4-row playing field that uses consecutive reels to calculate wins but doesn’t require them to run from left to right. Anytime 3 or more of the same symbol appear on consecutive reels anywhere on the screen they will count towards a win. This can happen on any of the 466 paylines that are on the playing field.

Obviously, with a game depicting a godly rock concert the music plays a big part. It’s for that reason the player is treated with some evocative music. During the base game, this rock song takes a bit of a slower pace. We’re still hearing electric guitars but the speed is quite low. This changes as the player gets more consecutive wins or when the free spins mode is triggered. When the streak ends, the music slows back down. A great way to integrate the music into the game.

Gods of Rock! uses a lot of original symbols mixed with more conventional card letters. The low-paying symbols feel somewhat out of place, especially since they weren’t made to look particularly rocky. Instead, they seem rather bland compared to the rest of the game. Meanwhile, the high-paying symbols show us the different members of the band with each of them a distinct appearance and colour scheme.

The game boasts High Volatility and that does come across as you play. Since consecutive symbols reward a win, this means wins will not pay out a lot. For bigger wins, the game expects you to get a number of paylines to pay out at the same time. Then, through the cascading reels, have new wins trigger. And finally, you will want to activate the multipliers that are hidden underneath the reels. Only if you manage to do all this do you stand to win big.

To deal with the volatility players can pick a bet between £0.10 and £100 per spin. I started off with a low bet and found my funds to drop quite fast. Playing with higher bets will drain them even faster, but there is the prospect of a bigger win to compensate for the losses. It’s a choice players will have to make for themselves. A jackpot of 20,000x your bet is enticing but I never felt like I was close to winning it.

Gods of Rock! uses quite a few different features to change up the gameplay. These include:

The game takes place almost entirely on the main screen. Getting into the free spins mode was pretty difficult for me. I only saw it activated a handful of times over an hour of play. The game requires you to get a series of consecutive wins in a single spin to charge up the meters at the side. If these meters are filled up half the game will drop up to 3 charged Wilds onto the screen. If the meters are entirely filled up, the free spins mode is activated.

Charged wilds will add multipliers to different reels. If the player gets a win that is on or includes that reel, the multiplier is applied to the entire win. If a win reaches across multiple reels with multipliers, those multipliers work off each other. So for example a 2x and 4x multiplier will grant a win an 8x multiplier. Although this be very beneficial, I struggled to actually have it happen that way.

Gods of Rock! offers players something fresh and original. While the pantheon of Gods isn’t a rare sight among video slots, their appearance as rockstars is new. The way it was visualized felt very appealing to me, with a grand shot of a crowd watching the performance in the background. The reels themselves also feel quite energetic, although I would’ve liked to have seen different low-paying symbols.

The game’s features are rather simple and there aren’t a lot of them. This keeps the gameplay quick and tight. There isn’t a lot to worry about or to keep track of. Players who dislike collecting scatter symbols to trigger the free spins mode will be pleased. The method of activating it through consecutive wins felt more engaging.

When it comes to downsides, the high volatility must be addressed. I felt like the payouts for regular wins were a bit too low, as the game relies heavily on multiple features to activate at once for a player to get a big win. This means that the odds seem unfairly stacked against the player. As such, there will be only a precious few times where the stars align and a massive win would be granted. If that makes up for it is up to the player to decide.

Play Gods of Rock! for free

Browse casinos with Gods of Rock! and other slots from Thunderkick. Create an account and try the game for free before making a deposit.

You can play Gods of Rock! in English, Finnish, Swedish, Norwegian 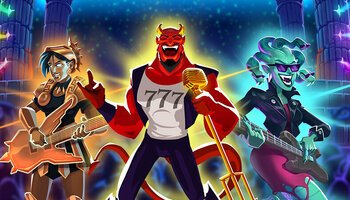