The gold rush that started in the Wild West era has all but disappeared. Even today, Gold Diggers live on as an online slot and individuals who are into the sport of sifting sand and swinging picks can be seen in the Alaskan wilderness or playing the game at hand.

I tried Gold Diggers a while ago and can remember going back to the game a few more times. It is a game that was made in the style of Betsoft slots from the early 2010' - full of picture-only symbols that tell the story of few simple folks who've been caught by the gold rush. The game is rich in animated skits and I can guarantee that it is impossible to get bored while playing it.

There are a few elements of the game that I like. It comes with 30 paylines and a regular multiline payout mechanic, but there is one particular symbol that can bring winnings and create one or more symbol cascades.

Two other extra features can trigger in the base game where you can hit a shiny, lucrative gold vein, which is my highlight of Gold Diggers.

The theme is described in the title and I can admit that this is just one of about a dozen gold digging-themed slots I've come across. Nevertheless, the game is unique because of its graphics, which is a flurry of animated sequences, hoedown dancing and three bluegrass tunes that come at a different tempo.

My favourite part of the design is the comical skits which are quite common for Betsoft games from the same period. The gold proprietors of Gold Diggers can be heard making yippee-ki-yay-like exclamations in an Okie drawl and dancing about when they hit a patch of gold in the rocks.

With me, there is a thing about older Betsoft slots - they all make an attempt at making you laugh, and some are actually good at that. And you’d think, why not, even though this game’s bonus features are the only places where you can hit some nuggets of gold.

Three features sounded good enough for me to try the game when I found out about it. There is a single thing that I mind about Gold Diggers and that's the lack of a wild symbol. On the other hand, the game can make payouts for two matching symbols that belong to multiple symbol kinds, so there is a balance to it.

As for the features, two are pick-me games and one is a respin that can potentially lead to multiple payouts, and that about covers the absence of a free spins bonus.

This symbol can pay 40x, 100x and 200x your payline bet for three, four and five symbols and trigger a cascade of new symbols.

I had a multiple payline win with the dynamites, freeing up a lot of positions on the reel set which turned up another double set of matching symbols, so I think that this feature can be just as exciting as the gold-digging feature, in terms of payouts.

The gopher is another paying symbol that can trigger a bonus. This is a simple pick-me bonus that can send the critter digging tunnels and returning with a cash prize.

I've had this feature trigger a few times and it's nice to get the boost in credits, but it doesn't pay as much as the main bonus feature.

The symbol of a poster calling on miners to join the California gold rush is what can take you to a special vault down the mine shaft.

This is where the three gold diggers can be seen dancing as you select from the numbered boards to reveal cash prizes that are added together at the end.

The biggest single-time prize that I got on Gold Diggers was 860x payline bet and it was during this bonus game. Sadly, this feature doesn't trigger as often as the previous one.

Gold Digger has a decent paytable and I like the fact that two out of three bonus symbols (gophers and dynamites) can also pay.

Furthermore, six out of ten symbols can pay for two of a kind. Although these payouts are small - they range between 2x and 15x your payline bet, getting a winning outcome is better compared to Gold Diggers firing a lot of blanks - which it doesn’t.

You can play the game across 30 paylines or you can choose fewer lines. While this impacts the amount of your wager, I always like to put the game's full potential to work and not miss out on any winning outcomes.

Speaking of those, there are only three symbols (pick, wagon and tin plate) that can pay way below the bet for three of a kind. Landing four matching symbols with the second-lowest symbol can pay back your bet amount (30x your payline bet), which I find to be promising.

Gold Diggers is not a game that makes big win events depend on the bonus features. I’ve had decent winnings land in the base game because the medium variance tends to keep a narrow spread between your balance and the house. This would have been the perfect old-but-gold Betsoft slot if it weren’t for the low RTP of 91.23%.

I’d still recommend the game, but there are new mining-themed slots, like Yggdrasil’s Dwarf Mine, which comes with shifting rows and bigger payout potential. Nevertheless, if you are looking for a simple game that can make payouts regularly, you can try Betsoft’s Gold Diggers.

Browse casinos with Gold Diggers and other slots from Betsoft. Create an account and try the game for free before making a deposit.

You can play Gold Diggers in English, Finnish, Swedish, German and 21 other languages. 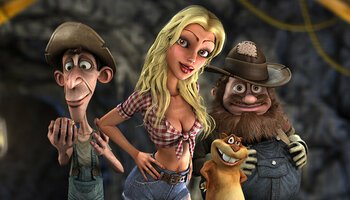