Gold King, of course, refers to Midas, the king from antiquity who turned everything he touched into gold. I’m curious to see if he can do the same thing for me as I explore his treasure room.

Play ‘n GO developed and released this video slot in 2018, which makes it almost brand new. That shouldn’t be hard to tell, given a large number of features as well as the assortment of excellent graphics. Meanwhile, the soundtrack does a serviceable job to keep me in the mood. The game consists of a 5-reel, 3-row playing field with a total of 20 paylines.

Obviously Midas is a popular source of inspiration for game developers, which means there’s a large selection of slots with a similar theme if you’re looking for that. What to think of Midas: Golden Touch by Thunderkick, or the King Midas slot by WMS. If you get tired of Gold King, be sure to give those a try as well.

For now, I’ll focus my attention on Gold King, however. This was a fun, dependable slot when I first played it and it continues to be that now. The slot looks great, with a background that showcases a literal pile of gold coins, presumably in some sort of vault. Meanwhile, the different symbols are very nicely designed.

Some of them, like the Midas symbol, are properly animated when part of a win. The other symbols are only subtly animated, flashing or glowing when they’re on a winning payline. Getting into the free spins mode, unfortunately, doesn’t add any special graphics, only a counter at the top of the screen.

The soundtrack was alright, giving some energy to the game. That said, I don’t think the music was really related to King Midas or the setting in general.

The symbols look hand-drawn but are kind of sterile, and I think adding an animation might have made it look a bit more appealing. Still, they fit the theme very well and look amazing.

Gold King has quite some features that I’ll go over quickly. To start with, a quick list of the features themselves:

The Free Spins mode triggered very rarely for me, although your mileage may vary. What I did like was that when it triggered, more free spins could be added by getting more Scatter symbols. 1 Scatter Symbol adds 2 Free Spins, 2 Symbols add 4 and 3 Scatters add 10 Free Spins to the total.

While other slots usually have Scatter Symbols appear on all reels, Gold King only adds them to reel 1, 3 and 5 which means you need all 3 to get Free Spins to trigger. That’s probably why I didn’t see it activate very often.

The stacked reels mechanic during the base game was a little confusing for me. The info table talked about adding 12 consecutive spaces on each reel with the same symbol but during my time playing I didn’t see that pan out.

The Golden Spin feature is a little more obvious. The Gold King blesses the reels with his golden touch, having reel 1, 3 and 5 stacked with the same symbol. After this, reel 2 and 4 spin as normal, possibly revealing a large payout.

Gold King is one of the newer slots and it shows in a lot of ways. The graphics are great and the features are pretty original. A nice combination if you ask me! The game does miss out a bit on any special animations. Where NetEnt and Yggdrasil add intro cinematics or special animations when the free spins mode is triggered, this game has none of that.

I had a good time playing the slot though, especially because the stacked reels can really pay out big. With the ability to choose a bet between £0.20 and £100 there’s plenty of flexibility and the max. win of 5,000x your bet means it could pay off well.

All in all, I am a little disappointed they didn’t add some more modern additions to the game in terms of looks and animations, but the overall experience was definitely positive. The sound was alright but didn’t quite suit the theme. In contrast, the features were well thought out and added some replayability to the slot.

Browse casinos with Gold King and other slots from Play'n GO. Create an account and try the game for free before making a deposit.

You can play Gold King in English, Finnish, Swedish, German and 30 other languages. 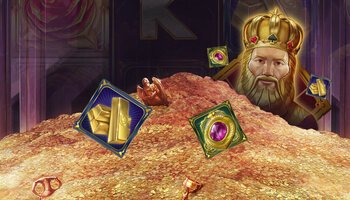