Gold Lab has the process of creating gold down to a science, using a wide array of bottles and gems to maybe create some stunning wins!

Developed by Quickspin and released in 2016, Gold Lab is a solid representation of this developer’s slots. It has excellent graphics, a commendable soundtrack and some interesting features. On the flip side, the game does very little new and sticks close to the classic formula.

With a 5-reel, 3-row playing field and 25 paylines I would consider Gold Lab to fit exactly in the middle of the average slot scale. It does win out by having some personality, mostly in the form of the scientist standing to the side of the playing field. This character is emotive and animated, dancing when there’s a win or cheering when we activate the re-spins mode.

The background shows us some elements that reminded me of a factory machine, which in the context of the game could be some device the scientist uses to craft gold. Meanwhile, the Re-Spin mechanic, as well as the Random Wilds feature, is integrated into the background through a system of tubes on the screen.

When it comes to the soundtrack, Gold Lab comes with cheery but disconnected music in the background. They didn’t really incorporate any sounds you would associate with a laboratory into the sound design. Maybe some bubbling beakers or grinding gears would have elevated the immersion to a new level.

Each of the 4 low-paying symbols has a Golden Bonus variant, which has a golden border around the symbol. These act as Scatter symbols.

With the game’s Medium Volatility I still found the payouts very low, even for five-of-a-kind wins. Especially because during my time playing I barely got wins that long, which meant the payouts were even lower.

Gold Lab doesn’t have a lot of features and I found them to be interesting but ultimately rather pointless. They rarely factor into the gameplay and when they did, only had a small impact on the game.

The main draw of the game is the Golden Bonus feature. For every low-paying symbol, there is a variant with a golden border which can appear on reel 1, 3 and 5. When this happens, that low-paying symbol is turned into a Random Wild and the player gets 4 re-spins.

During the Re-Spins, additional Golden Bonus Scatter Symbols can appear for the remaining 3 low-paying symbols, also turning these into Random Wilds. When this happens, the player receives 1 additional re-spin. This can occur until all 4 symbols are turned into Wilds.

In my experience, this can turn out to be very lucrative. Making back 20 to 40x my bet would be a regular occurrence. However, this was usually with only 1 symbol turned into Wilds. I imagine getting all 4 symbols turned into Wilds would be extremely nice but at the same time, only getting 1 additional Re-Spin does not give a lot of room to capitalise on it.

In other words, in the best-case scenario, it would take a player 3 of the 4 re-spins to get the 3 remaining symbols to also turn into Wilds. That leaves 1 re-spin, plus the 3 extra re-spins, to really benefit from it. Even though it’s possible, the likelihood is so low it’s barely worth contemplating.

Gold Lab is not a bad slot but it is pretty stale. The graphics are good, very colourful and energetic. The music is nice but forgettable. I thought the features were okay but really don’t show up enough to feel like an intricate part of the game. Instead, they sort of appear when they feel like it, which isn’t too often.

If you’re a fan of classic slots with some modern graphics and a few features that change it up just a little bit, you might enjoy Gold Lab. Players that prefer either the more classic experience or something truly original and modern will probably not enjoy it as much.

The final thing to mention is the possibility to pick your bet between £0.10 and £100 per spin. There is a max. win of 413x your bet which is quite disappointing. I would say this slot is more an entry-level slot to Quickspin games than it is a serious contender for your time!

Browse casinos with Gold Lab and other slots from Quickspin. Create an account and try the game for free before making a deposit.

You can play Gold Lab in English, Finnish, Swedish, Russian and 4 other languages. 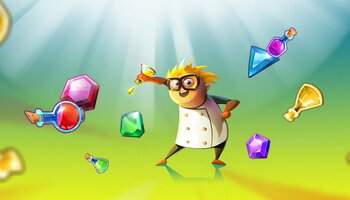