Gold Megaways is a slot that takes the original Gold slot and reinvents it slightly with the use of the popular Megaways feature. This means you’ll be treated with the familiar gold plated visuals of the original but with Megaways and free spins.

If you are at all familiar with the original slot developed by Big Time Gaming, you’ll immediately recognize its influence when it comes to this new version. Even though the graphics are updated to be sharper and better-looking, the same vibe is maintained. I’m personally not a huge fan but I can’t deny that it lives up to the name.

As a 2021 release, it’s built around the Megaways feature, which gives each of the 6 reels a random number of rows between 2 and 7. As a result, players have a shot at getting a win with up to 117,649 paylines. The appearance of the slot is kept rather simple, with a red curtain as the background. The game itself is mostly filled with wealth-related items like golden cars, rings and credit cards.

Something you will notice when playing the game is that it is heavily inspired by the song Gold, the 80s hit by Spandau Ballet. That’s why the song plays as you spin the reels. I did find it quite annoying it only cycles a small instrumental part during the base game. The famous chorus doesn’t drop in until you hit the free spins mode.

Gold Megaways takes the obvious route when it comes to filling up the reels, making everything look absolutely soaked in gold. The high-paying symbols at least take some inspiration from golden items. The same can’t be said of the low-paying symbols. These are simple card letters with a background made of solid gold. It doesn’t really feel very creative.

The game comes with High Volatility as can be expected and an RTP of 96,42%. This actually surprised me because it’s a little higher than normal for this type of slot. It means that players that bet £100 will on average win £96.42 back. Obviously, this is only an average based on thousands of players and millions of spins, so you can never expect this to happen to you. Most likely, a player will walk away with nothing and only a small number of people will get a big win.

You can influence how quickly you lose your funds, or how much you win, by changing your bet. Players can pick a bet between £0.05 and £20 per spin. At the same time, there is a maximum win of 20,200x your bet to entice you to keep playing. The size of the jackpot was another surprise to me, dwarfing most other jackpots for similar slots.

Gold Megaways has a number of different features to keep the game interesting. Most of them are similar to the original slot. The biggest and most obvious inclusion is the Megaways functionality.

First, a quick overview of the features in the game:

I found myself spending most of my time in the base game. This will include most of the features that are part of the game, but it makes a big win harder to get. Most obvious is the Megaways functionality with the cascading reels. The wins I got were unfortunately not very high, even when the wins were already pretty rare.

Playing for more than an hour I only managed to hit the free spins mode once. The shortcut of activating it when getting a win that’s 70x your bet or more never even appeared for me. Inside the free spins mode, you have a better shot at big wins since the height of the reels is set at 6. As you spin, the reels can get even higher.

Gold Megaways is an adaptation of the original slot in every sense of the way. The graphics are updated a bit, making them sharper and more lively. At the same time, the Megaways functionality adds some modern gameplay mechanics to the basic game loop.

There isn’t much else to do though, as the high volatility makes it hard to get big wins. The free spins mode isn’t activated often enough to influence the results either. Once I did manage to hit it, there were some big wins but even then it wasn’t enough to bring me back to the starting point.

This results in a game that’s mostly interesting for players that enjoy the original slot or those that can afford to play for a long time. The size of the jackpot should be a nice incentive to try a little longer than normal, but there are plenty of better Megaways slots.

Browse casinos with Gold Megaways™ and other slots from Big Time Gaming. Create an account and try the game for free before making a deposit.

You can play Gold Megaways™ in English, Swedish 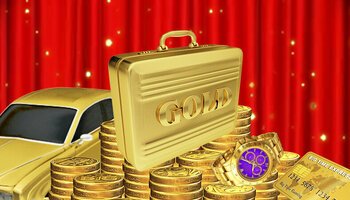