Gold Money Frog is the rather unique name for a NetEnt slot that has 3 progressive jackpots and a gold money frog to entice you into playing!

Developed by NetEnt and released in 2019, Gold Money Frog is a slot that gives you a 5-reel, 3-row playing field with 25 paylines and the opportunity to win one or more of the 3 progressive jackpots that make up the basis of this game! The game is set in a field of orchids somewhere on the Asian countryside, right at the dawn of a new day.

The graphics of the slot are simple but pretty, with the different symbols drawn in a cartoony but semi-realistic style. I found the colours to be very striking and the special symbols to stand out. There are unfortunately not a lot of animations in the game, except for the bonus game.

I started to notice that the newer slots by NetEnt, especially the ones released in 2019, are not as inventive or detailed as the ones that the developer released in earlier years. If that’s a change in design philosophy or if there are business reasons for that I don’t know, but it’s enough of a change that I noticed it.

As for the music, we can expect a generic Asian song with harps and flutes that creates a very peaceful atmosphere. Wins are punctuated with a short jingle while the bonus game triggers a more upbeat song. I liked the sound design but it was ultimately uninspired.

The features in Gold Money Frog were interesting to me but also mostly inconsequential. The bonus game showed up reasonably often, but the free spins mode hardly triggered for me at all. The game’s listed Medium Volatility did keep my funds at an acceptable level without these, but I needed them to get some big wins.

The base game is straightforward and didn’t offer me much excitement. The autoplay function does a good job here since I felt I wasn’t really interested in the base game. What I wanted was to get to the Bonus Game as that was where I could win the different jackpots.

The Bonus Game is simply a Bonus Wheel, divided into about 12 pieces. There are 4 for a coin win, 4 for the minor jackpot, 3 for the major jackpot and 1 for the super jackpot. The wheel spins and you receive the prize it lands on. Even though only 1/3rd of the wheel has coin wins on them, suspiciously I always landed on those whenever the Bonus Wheel triggered.

The Free Spins mode was very rare for me, triggering only occasionally during my time playing. Even though it doesn’t have the option of winning a jackpot I still found it to be pretty lucrative as all wins during it would get a 3x multiplier.

The features of Gold Money Frog were unfortunately mostly unremarkable for me. The Bonus Wheel seemed almost uncharacteristically dedicated to only hand out coin wins while the free spins mode didn’t trigger enough to feel like part of the game. Meanwhile, the base game was very basic and didn’t hold my interest for long.

Gold Money Frog is the type of slot that seems to go for the classic slot experience without much fanfare. The standard playing field keeps things clear, while the bonus game and free spins mode are simple enough to make sense to even the most novice player.

Unfortunately, that’s also a downside since it makes the slot almost completely irrelevant. There are other slots that stick closer to the classic slot experience. On the other hand, there are modern slots that take full advantage of the possibilities in terms of features, animations and music.

The game lets the player pick a bet between £0.25 and £50. The 3 jackpots are progressive, which means they increase over time, but have a potential max. win of 250,000x your bet!

I found Gold Money Frog to be a basic, fairly enjoyable slot that’s unfortunately not going to be in my mind very long. In fact, I can’t even say for sure if I played this game when it first came out even though it’s still so new!

Browse casinos with Gold Money Frog and other slots from NetEnt. Create an account and try the game for free before making a deposit.

You can play Gold Money Frog in English, Finnish, Swedish, German and 20 other languages. 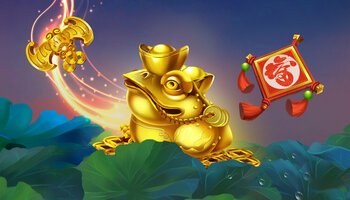