Gold Rush has a title that tells you exactly what it’s about. The slot is set deep underground in an old mine that is occupied by a gold-digger and his mule. The game further features a free spins mode, wilds and bonus symbols.

The game itself was developed by studio Pragmatic Play and released in 2018. This developer has a distinct style that it sometimes uses and you can immediately tell that their designer was giving some measure of freedom in designing the symbols. It looks similar in colour scheme to Wolf Gold, also developed by them. The symbols are divided between high-paying characters and items, and low-paying card letters.

Players will play the game on a standard 5-reel, 3-row playing field with the usual 25 paylines. So far there’s not much special to talk about yet. The game looks fine but leaves very little room for any kind of characterisation for the gold digger. Meanwhile, the playing field takes up so much of the screen it hides the background and we only get a glimpse of the mine itself.

All in all, the game’s presentation feels acceptable and looks fine, but it doesn’t go out of its way to make any kind of lasting impression. I feel like the setting allows for a little more creativity than is on display here. To be fair to the studio, that would require more work for what can be considered a negligible impact. For most people, the way it is presented here will do just fine.

Gold Rush features symbols that are drawn by hand, including the gold digger and his mule. There are other items here too that make sense in a gold mine. On the other hand, the low-paying card letters feel tacked on just to increase the number of symbols in the slot.

When it comes to the number of symbols in the game, it is one of the factors that determine its Medium Volatility. The game grants wins rather often but they aren’t likely to be very big without the aid of one or more of the features included in the game. Players should start off with lower bets to get a feel for the volatility before deciding if they want to go big.

I think this slot works perfectly well as an entertaining game to pass the time with, where wins are enjoyable but the volatility isn’t too high to make it unrewarding. In other words, if you play slots to relax this will be a good match. Obviously, it is also possible to make it riskier. The game lets players pick a bet between £0.25 and £125 per spin. Bizarrely, the max. win is only 161x your bet. This is a tiny number but it does mean you are more likely to hit it.

When it comes to the symbols in the game, you can see the following:

Gold Rush is a slot that aims to stay in the middle, offering little innovation when it comes to its features but making sure these features behave as people expect. This makes it the perfect slot for those that enjoy a standard gameplay experience without having to learn any new features.

You’ll be able to use the following features in the game:

For most of the game, you will be stuck in the base game. Getting the free spins mode was exceptionally difficult for me and I only managed to do it twice during my time playing. This is mostly fine as the base game does award you wins occasionally but you will not win big during this time. It is also more likely that you’ll start to lose funds and never be able to recover.

If you do manage to activate the free spins mode, it will play mostly like the base game. There is only one feature present in this mode but it has little impact on the opportunity for the player to get any bigger wins during that part of the slot.

Instead, these gold nuggets that appear on the screen will increase the sets of reels that will be used in the next spin. If the minimum limit is reached on the last free spin, the player will receive 1 additional spin.

I found this feature to be lacklustre since I only managed to activate the free spins mode once and both times I did not manage to collect enough gold nuggets to activate its special feature. As a result, I could only glean its function from the paytable. Not something I would consider a great design.

Gold Rush is very much a slot for casual players that enjoy a game with a specific setting and a standard collection of features. Players likely won’t feel very challenged by its gameplay as it offers little in terms of innovation.

That’s not to say it's a bad thing, a lot of people enjoy this kind of gameplay and it is the average for a reason. The hardcore power players will likely be turned off by its tiny jackpot while modern players might not be interested in it due to its common features.

I do wish the game had a more active free spins mode that wasn’t so hard to get into. The rewards I got from the times I did get into it were tiny and really not worth the effort to activate this mode. As a result, only play this slot if you want to engage with something simple and relaxing.

Browse casinos with Gold Rush™ and other slots from Pragmatic Play. Create an account and try the game for free before making a deposit.

You can play Gold Rush™ in English, Finnish, Swedish, German and 17 other languages. 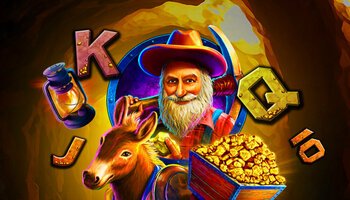