Gold Vein brings us far under the ground, deep into the mines that are run by the dwarves as we delve for gold and try to find the biggest gold veins.

Developed by Booming Games and released in 2019, Gold Vein is one of this small developer’s newest games. The slot takes place in an underground mine where a colourful collection of characters are digging the earth looking for wins.

The game has a 5-reel, 3-row playing field which seems to be the developer’s preferred size. There are a total of 20 paylines on the screen and comes with a High Volatility. I found the slot to look rather unique, with a very distinct art style for the different characters. The high-paying symbols are animated which brings it to life somewhat.

I thought the soundtrack was pretty flat with no music during the base game. All I could hear was the ticking of the reels as they spun. Occasionally I’d hear a dwarf shout when they were on a winning payline. Wins would trigger a little jingle. Only during the free spins mode did I hear any music and that was frankly a little too simple to make up for it.

All in all, the game has an art style that doesn’t really appeal to me but it did have its own character. It’s important to remember that the actual important elements of the game are the features and playability, which is why I’ll forgive them for the look.

The hawk-eyed among you might have noticed the Gold Nugget symbol has a max. value with six-of-a-kind. That’s because it’s the only symbol in the game that also has a double variant which counts as 2 symbols. I don’t know why they didn’t include this for all other symbols but it’s something to note.

At the same time, the Wild only has its own value when it’s part of a five-of-a-kind payline. Otherwise, it will take the properties of any other symbol except the Scatter symbol.

The game has a few more features than I’m used to from Booming Games. To begin with, I’ll give a quick overview:

While I was playing Gold Vein I found the Random Bonus Reel to be the most interesting aspect of the game. It didn’t appear very often but I still thought it was an excellent way of introducing some randomness to the game. The Random Bonus Reel could appear on any reel but would most often show itself on either reels 2, 3 or 4.

Each of the different symbols on the Random Bonus Reel was beneficial. During the base game, it could be a Wild, a Double Gold Nugget Symbol or a Scatter Symbol. While I was in the free spins mode, they could be Wild or extra free spins. This all feels like an extra, even though it’s beneficial.

The listed High Volatility did show itself at points. Not necessarily due to the low number of wins but rather the low payout for paylines. It was only the high-paying symbols that were really worth the trouble and even then they had to be four or five-of-a-kind long to count.

The free spins mode activated about as often as the Random Bonus Reel appeared. I did like that the Wilds during the free spins mode were sticky, making it more likely to get some wins. That said, it was not a guarantee and I had quite a few disappointing Free Spins.

In general, I found the features of Gold Vein to be interesting but to only occasionally make an impact on the gameplay. The Wilds are nice, especially when its a multiplier. At the same time, it was so rare that there really was no way of counting on it. I prefer slots that either have more visible features or at least a lower volatility.

Gold Vein is a solid effort by Booming Games to create an interesting, engaging classic slot. The experience that a lot of players prefer is engrained in this game with its standard playing field and simple gameplay. The player doesn’t have to do much more than spin the reels.

The most important decisions for players is probably going to be which bet to pick. Players can choose between £0.20 and £400 per spin while the max. win is 2,000x your bet. Although that’s quite impressive it’s not as high as other slots and the volatility makes it quite dangerous to bet too much.

Booming Games seems to be really targeting the classic slot player. If you count yourself as one I would recommend you give Gold Vein a try since it does a lot right. Don’t expect any fancy features or a lot of interactivity. Instead, sit down and relax as the reels spin.

Players who are looking for high-end graphics, modern features or a transcendent experience will not find it here, unfortunately!

Browse casinos with Gold Vein and other slots from Booming Games. Create an account and try the game for free before making a deposit.

You can play Gold Vein in English, Finnish, Swedish, German and 23 other languages. 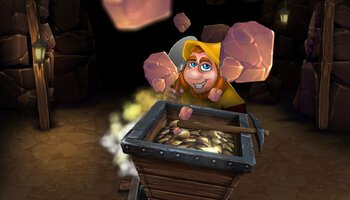