Get ready for an eruption like no other with Gold Volcano. This slot will turn any preconception of Cluster Pays engines on its head.

Whereas in most other titles the tiles fall from heaven, in Gold Volcano the tiles are pushed up from the ground below. Hand of heart, it took me a while to get used to this. But I did enjoy the novelty, especially when a scatter tile moves from the grid to the crystallisation meter.

There are a host of other features at play here but ultimately what you want most is to see that volcano erupts and spew free spins all over the place.

There are two types of symbols in place - the precious gems which are the high-paying tiles and the card suits which are the lower-paying ones. There is also the scatter tile which is a crusted magma stone.

The big wins happen when there are large clusters of the same kind of tile next to each other. For example, 30+ Gold tiles will pay out 1,000x but since these are quite hard to get to the below values are taken from the middle of the scoreboard.

The symbols in clusters of 10, from highest to the lowest consist of:

Volcanoes are volatile by nature and this slot isn’t any different. Its volatility is set to high (around 7/10) and this can certainly be felt throughout the game.

That’s not to say that I cannot see the potential for some great winnings, especially when it comes to the bonus round and all the extra features in play. However, on this occasion, it wasn't my turn to experience any big wins.

Browse casinos with Gold Volcano and other slots from Play'n GO. Create an account and try the game for free before making a deposit.

You can play Gold Volcano in English, Finnish, Swedish, German and 30 other languages. 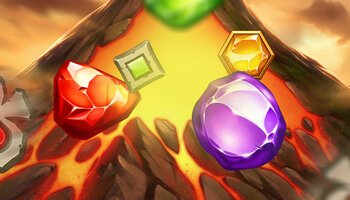