Gold is the most straightforward name to a slot that makes it exceptionally difficult to find. As can be expected with such an obvious name, this game focuses on the rare metal and its various properties. The game features Multiplier Wilds and Free Spins to change up the gameplay somewhat.

Developed by Big Time Gaming this slot was released in 2014 and it kind of shows. The graphics are very flat and uninspired, with a varied collection of seemingly random items that happen to be coated in gold. It’s clear that this slot is not intended for the players that prefer games with a lot of graphic fidelity.

Instead, the game offers a standard assortment of symbols and features. The pace of the game is quite high and comes with Medium Volatility. I was actually quite surprised to see how fast my funds were dropping as I started, considering the number of wins I was getting. This is definitely something players should be aware of.

The game has a standard /b>5-reel, 3-row playing field with 20 paylines. Whenever there’s a win the payline lights up. Some of the symbols actually do have an animation, like a suitcase opening up. The background is a simple purple with nothing else. It seems like the title really only refers to gold and has no clever hidden meaning.

To fill the reels, Gold includes a selection of both high- and low-paying symbols. While the high-paying symbols are various gold-plated items, you’ll notice that the low-paying ones are simple card letters. The designers did add some colour to these letters but they aren’t very inspired. I suppose that the lack of a theme means that they aren’t really breaking that illusion either though.

The payouts are quite for longer wins but they are also rare, meaning that even though the regular wins should be enough to make back a fair number of spins they won’t appear often enough to really have that effect. As a result, while I played my funds dropped almost from the start and never really recovered.

To keep the game interesting for all players, it’s possible to pick a bet between £0.20 and £10 per spin. The max. win is 10,000x your bet which is obviously appealing but required 5 Wilds on a winning payline. In my time playing, Wilds weren’t exactly rare but I never saw more than 2 on the screen.

Gold has only a small selection of standard features but that’s not to say these aren’t effective ones. The way they work together can be quite interesting. In my time playing, I didn’t get many big wins out of it but I can see them happening regardless. It might be a bit hard to get them to activate, however.

The Wilds in the game appear frequently but unfortunately most of the time not enough of them to grant a win. The Wilds do apply a 2x multiplier to any win they’re part of which helps somewhat. I found that most of the time you will only get a three-of-a-kind win. The speed of the game is also quite high so it pays to keep your attention.

When the Free Spins mode is activated, the game functions exactly the same as the base game. There are no extra features and even the Wilds don’t operate any differently. This resulted in this game mode to be rather lacklustre and not worth it in terms of wins.

If you’re looking for a game that holds a lot of interesting features or tries to do things differently, Gold is obviously not for you. There is a basic quality to the game that allows players to enjoy the very simple gameplay loop that most slots hold.

As the name, the look and the features imply, Gold is not looking for a prize in originality. Instead, it offers a very simple and dependable gameplay loop that will be familiar to everyone who has ever played a slot before.

The looks are unimpressive with the graphics being sharp but uninspired and it doesn’t hit any notes when it comes to originality. The entire experience left me feeling rather bored and looking for something else to do. The slot will probably not be easy to remember by people that have played it since it does so little to stand out.

If you want to waste some time with a simple game that requires no preparation, Gold will probably offer that experience. People who want to get anything out of their time playing a slot will likely move on to something else.

Browse casinos with Gold and other slots from Big Time Gaming. Create an account and try the game for free before making a deposit.

You can play Gold in English, Swedish 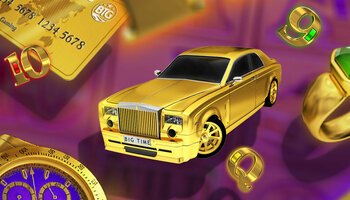