If I can go back in time and settle for the life of a travelling trader I wouldn't mind riding a camel laden with precious goods, wearing silk robes and silk slippers. It sounds like a tolerable level of hedonism, especially if it is padded some more by Middle Eastern delights, such as baklava.

That's dreams aplenty for a single train of thought, but who can help it when there is a game called Golden Caravan in front of you? This is the famed Play'n GO slot that has a maximum payout potential of up to 250,000 coins.

This game is ancient enough, in terms of slots years, that it lets players choose the number of paylines. Players can play on a maximum of ten paylines that spin on a layout of 3x5 with coin values ranging between one penny and £1.00.

The key feature in Golden Caravan are the wilds. The substitute symbol can work its magic in the base game, however, it is the free spins bonus where players can witness a Fata Morgana becoming real, by landing three wilds.

The title of the game gives away the theme loud and clear. We are taken to the age of Eurasian trade via the silk route, which has existed since the dawn of civilization.

It looks like Play'n GO didn't really care about turning Golden Caravan into a visually-stimulating slot. The high-paying symbols are colourful drawings of camels, tradesmen, treasure chests and a desert oasis that lack animation.

There is only one event when things can get really exciting and that is when the wild scatter lands in two positions and you are waiting for the third. In the event, the reels a flush in golden dust, which may be a sign of the shape of things to come in the bonus feature.

I have to give it to Play'n GO for finding the perfect cinematic tune for this reel adventure. If the graphics lack movement, the music definitely compensates for it.

Whenever I find a game like this one I like to remind myself of a certain slots-related truism - two wilds are always better than one. The same is true for the game at hand, as it has both a wild symbol and a wild-scatter.

I think that one of the reasons why Golden Caravan lives up to its reputation is because of the two-symbol payouts. Each one in the high-paying symbols category can trigger a win with only two matching symbols.

Despite only paying 0.5x your bet, it's definitely better than nothing. On the other hand, I find the payouts with three symbols quite generous in comparison to so many games out there.

Wins with three of a kind that involves the oasis, the treasure chest and either of the tradesmen pay 2x, 2.5x, 5x and 10x. Wins with four or more symbols cross over in the medium to the big-win zone.

I can say that the base game doesn't leave you thirsty in the middle of the desert. With two of a kind payouts and the cards symbols paying decent amounts, most players should make it to the bonus feature before giving up on the game.

Overall, Golden Caravan is all about the two wild symbols, as both can substitute for other symbols during the free spins bonus. And yes, it is the bonus feature where the big win potential lies, however, I was pleasantly surprised that the base game has been inclined to generating several payouts for four and five symbols. For me, Golden Caravan has been the best example of a high-volatility slot ever, which is why the game is still popular.

Browse casinos with Golden Caravan and other slots from Play'n GO. Create an account and try the game for free before making a deposit.

You can play Golden Caravan in English, Finnish, Swedish, German and 30 other languages. 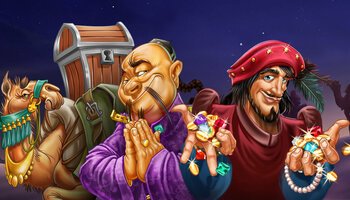