Unlock the Golden Cryptex and see what is hidden inside. This is a unique slot with highly thematic special features.

Red Tiger released Golden Cryptex in the spring of 2020. This is something that surprised me, as this slot would have been perfect about ten earlier. Cryptexes were in fashion back then and a lot more interesting subject to players.

Golden Cryptex is based on Dan Brown novels and especially on the Da Vinci Code. Dan Brown is the person who coined the name cryptex and his books are the first mention of such items. Red Tiger says the game has a Renaissance theme, but seeing that the first-ever physical cryptex was created in 2004, I think we can guess where the theme actually comes from.

The game itself is as strange and cryptic as the theme. On the surface, it might look like any other slot, but you’ll quickly notice that it’s anything but. The paylines and the entire pay structure are unusual, as are the special features. This is a novel game, but it is slightly divisive.

Golden Cryptex looks good and it properly utilises the concept of a cryptex. The entire game is one big cryptex and the reels and the locking discs. It looks like it could have come straight from a Dan Brown novel, but this time it is up to you to crack it open.

The game itself is fairly easy, but it looks a bit confusing at first. The quirky mechanical choices and a slightly suboptimal rulebook make it a bit hard to learn. It’s not that the game is difficult, rather it’s just different.

Once you get the hang of it, the game runs smoothly. You can easily tell the symbols apart and know when you are doing well. Even opening the lock is made clear, as the correct symbols light up.

The sound and music are a bit disappointing. The music is trying to create a mysterious atmosphere, but isn’t doing much. It’s just too quiet and simple. I did like the clicks and clanks the cryptex makes, but other than that, there aren’t many noteworthy effects. The best word I can think of to describe the soundscape is ‘meh’.

Golden Cryptex is a beautiful game and this is one where I would have wanted to see even simpler symbols. Just take out all the picture symbols and add more letters. I believe this is the first time ever when I have said that about a slot.

The first thing that makes this game stand out, are the paylines. There are only three of them and they are all horizontal. This is something that takes a while to get adjusted to, but when you do, it’s easy to tell when you are winning.

The second unusual thing is related to the paylines, and that is the pay structure. The worst winning combination here is worth 3x your bet. This is a huge amount, which also tells you right away how often you’ll win anything. All of the wins are big and rare.

All of the special features in Golden Cryptex are activated through the locking mechanism. You need to hit the correct combination to unlock the free spins and then do it again to win the cash prize. I just love how they incorporated the lock as a key mechanic in the slot. It really adds to the atmosphere.

As you might have guessed at this point, the game has high volatility and low hit rate. This can make the game feel really heavy and punishing. There are no little wins in Golden Cryptex, which is something that not everyone will like.

You can see the code on the top of the cryptex that needs to be entered to open it. It is about as secure as my luggage, as the code is always five aces. If you get that on the middle row, you win 10 free spins.

To make it a bit easier, the game has re-spins. If you get at least three correct symbols, the game will re-spin the remaining reels.

During the free spins, the code is always changing. Now it can be five of any one single symbol, but at the same time, you can get them on any row. Just as long as the reel has the symbol visible, it’s good. Opening the lock will get you three extra spins and a cash prize. The prize is the same as getting those five symbols on a single payline.

The re-spins are also available here. Just get at least three symbols right and you get another chance of getting the rest.

Golden Cryptex is a unique game, which means that some people will love it and some hate it. For me, the game is a bit of both. I love the design and the theme, but I hate the pay structure and the hit rate.

The theme especially is well done. The game feels like a whole and every little detail fits. The game might have come out about a decade too late, but if you are interested in puzzle boxes or cryptic locks, then this one's for you.

Unfortunately, the game itself felt too heavy for me. The low hit rate and special feature that activates rarely are a bad combination in my books. It took me roughly 700 spins to open the lock for the first time, which wouldn’t be so bad if there were other bonus features.

In the end, I can see that this is an ambitious game. If I look at it objectively, I’d say that it’s totally worth a try and an interesting experience. My subjective view is a tad more negative, seeing that I won’t probably ever play it again.

Browse casinos with Golden Cryptex and other slots from Red Tiger. Create an account and try the game for free before making a deposit.

You can play Golden Cryptex in English, Finnish, Swedish, German and 18 other languages. 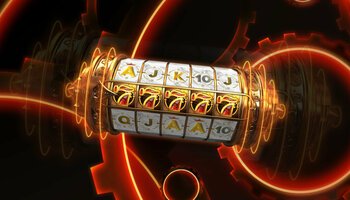