Venture into the world of Ancient Egypt with Quickspin’s Golden Glyph 2, launched in the summer of 2021. It follows Quickspin’s hit developed in 2019, the studio’s first cluster game. Needless to say, the sequel follows the cluster game mechanic but adds something more to the mix.

The 7x7 grid has tumbling reels. Every time a win is registered (when a cluster of 5 or more is formed), the symbols are removed and others will tumble in their place. The tumbling ends when there are no more symbol combinations.

This game is beautifully designed, but that’s a given with anything Quickspin does. The tile design, the animations, even the music, all come together to deliver a slot that has the potential to become a summer hit.

All symbols are a feast for the eyes, particularly the high-paying ones. The animations too are beautifully designed, especially the golden scarab scattering wilds all over the grid.

The orange viper and the purple ankh aren’t included in the paytable but seem to yield the same amount as the blue wave.

Every spin comes with 7 power-ups which are activated whenever a Power Glyph is part of a winning cluster. The 7th power-up is always a Gigantic Wild in the base game and the other 6 power-ups come in at random and consist of either Golden Scarabs or the Patterns of Horus.

The Golden Scarab will spawn 4 to 10 wilds in the play area. The Patterns of Horus will remove tiles according to their pattern. These are the cross, the bird, the Ankh, the eye, the hourglass and the snake.

Three pyramids in the base game will trigger the bonus round (after there are no more combinations in the spin) and award 7 free spins. The bonus game is similar to the base game but here you will start with a Golden Glyph which acts as a Wild.

On the 7th Power-up, another Golden Glyph is put into play. After 4 Golden Glyphs are in play, the player will receive an extra free spin instead. Another 3 pyramids appearing in the bonus round will award an additional 5 free spins.

With volatility set to high (4/5 according to Quickspin notes), I was taken on quite a ride with Golden Glyph 2. I didn’t get many wins on the base game and the ones I got were on the low side. The higher ones I managed to achieve hovered around the 15x yield. All this happened when the Gigantic Wild Power-up was triggered.

The two times I managed to enter the bonus round the yield averaged 57x. This is not a high number considering I did lose quite a bit to get into both bonus rounds. I also felt it was really hard to get close to the 26,800x max win. But with a chance of landing this being 1 in a billion spins, it makes it quite the needle in the proverbial haystack.

Having said this, I did highly enjoy playing Golden Glyph 2. The game’s features do keep each spin fresh which is something that most studios struggle with achieving. There’s definitely a good mix of interesting mechanics and gorgeous eye candy here. Quickspin did the right thing revamping the old favourite.

Browse casinos with Golden Glyph 2 and other slots from Quickspin. Create an account and try the game for free before making a deposit.

You can play Golden Glyph 2 in English, Finnish, Swedish, German and 24 other languages. 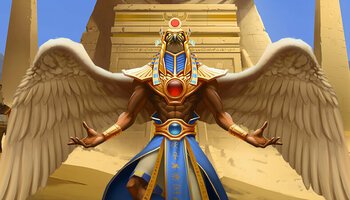