Golden Glyph is a game that is set at the height of the ancient Egyptians, giving us an impression of what it might have been like living in this time as well as enjoying a slot with non-standard reels, multiplier wilds and free spins among other features.

The Egyptian setting is a popular one amongst developers and it seemed that Quickspin decided they also had to release one in 2019. The result is this game with a big 7x7 playing field that uses the cluster pays mechanic to calculate wins. People who are familiar with ancient Egypt or have played games in the same setting will know what to expect. The backgrounds show us a wide view of what looks like Cairo but with some impressive statues that are even bigger than the pyramids in the distance.

The game is largely static with only some very subtle animations on the screen and only a special feature that really brings the game to life. The symbols in the slot are all original but due to the size of the playing field, they are rather small. Through the use of colours and shapes, they do stay very easily distinguishable, which helps in seeing if there are any clusters.

As is tradition with these types of games, the sound-design takes the usual cues from Egyptian music to help with the mood. I won’t say that the sounds and music are bad because they all fit the setting, but I can’t really say it’s all extremely original either. The fact that it’s made exclusively for the slot does help it stand out somewhat, but most of what we can hear we’ve heard before in some variation.

Where the symbols don’t show an abundance of originality with things like Ra, a Pharaoh and hieroglyphs, I did appreciate they were all originally created for the game. There are no card suits or letters here as they would fit terribly with the setting. Instead, players are allowed to become immersed in the Egyptian theme. Even the way the features are presented helps with this.

The symbols you can find in this game are, from highest to lowest:

The game only has a small number of symbols and a large playing field, which makes getting clusters easier. On the other hand, the game requires at least 5 symbols in a cluster to count as a win. Additionally, most wins are small and it requires multiple clusters or the cascading reels to generate multiple wins in order for the wins to become sufficient to make back some bets.

As a result, the game is listed with Medium Volatility which I found to fit my experience quite well. Players can help balance the risk somewhat by picking a bet between £0.20 and £100 per spin. To keep them incentivised, the game offers a max. win of 13,185x your bet which is surely one of the bigger regular jackpots around.

Golden Glyph brings a selection of features to the game which mostly relates to the number of wins a player can get in a row through the cascading reels feature. The more wins the player gets, the better the features are that activate until the player reaches the free spins mode.

The functionality of the different power-ups is obvious, as the game shows the power-ups that you’ll be awarded if you get a series of wins in a row. The last power-up is always the free spins mode, which can be quite difficult to activate but in my experience is definitely worth it.

Golden Glyph offers the usual Egyptian experience to players who are in the mood for something that doesn’t use the standard slot gameplay. Instead, they are treated to a 7x7 playing field with a series of simple but colourful and original symbols. The background is very pretty if a little too static, and there are a number of features that spice up the gameplay.

The way the game plays is simple to understand and I would consider this a pretty good introduction slot for people that want to give the Cluster Pays and Cascading Reels features a try. The way the game rewards multiple wins is also a nice idea, especially since you can see what power-up is going to come up next.

One thing to keep an eye on is volatility. Although it’s listed as medium and the game does reward regular wins, big wins are mostly reserved for the free spins mode. Since that’s quite hard to get into, players have to be prepared for long stretches of time without declining funds.

Browse casinos with Golden Glyph and other slots from Quickspin. Create an account and try the game for free before making a deposit.

You can play Golden Glyph in English, Finnish, Swedish, German and 16 other languages. 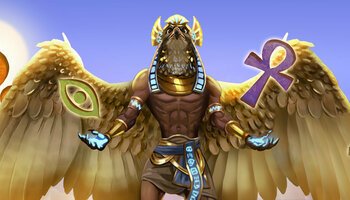