Playing on Golden Goal could amount to the type of a "miracle" that was Maradona's "Hand of God" or it can result in a straight red card. The allegory may make sense because this online slot has a progressive jackpot prize that can shake out on a single payline only.

I am not a big fan of one-payline slots and am I glad for being born in the age where these games are not the only thing on the menu! On the other hand, I am a big fan of the football game and I do have an understanding about why the player that I mentioned above resorted to an illegal move to score against England. He wanted to win it all. And he did!

Golden Goal is a progressive jackpot slot after all, so I didn't pay any mind to the fact it isn't a game with a more contemporary layout, such as 3x5 and at least 10 paylines.

My experience with the game isn't even mixed, rather it's a straight-up annoyance because the RTP is below the average at 94.12% and the variance is high. Paying outcomes were few and scanty, but the thrill of getting a big prize was there, as the biggest payout, save for the jackpot, is 1,600x your bet.

The graphic design does the bare minimum for the visual experience - it grasps the essentials of the football game, and that is about it. The symbols are very much two-dimensional, lacking animation and not offering an iota of vibrancy.

Considering Play'n GO had made the game in 2012, which in terms of online slots doesn't amount to BC times, Golden Goal could have been so much more. The fact that you are playing on a progressive jackpot slot is not reflected through the look and feel of the game.

Is anyone expecting an extra feature in this game? Not I. You aren't going to find it. So in that regard, you might as well be playing on the Liberty Bell, which is generally accepted as the first slot machine in the world.

I might not be wrong in singling out one tidbit, that players can get a payout for a single symbol, which is the logo of Golden Goal. Everything else is single payline languish, albeit for the possibility of winning a potentially huge progressive prize.

Bets are configured by selecting the coin value and the number of coins. The latter is a setting that multiplies the coin value by either 1x, 2x or 3x for the total bet per spin, and that reflects on the paytable. A quick glance to the right-hand side of the screen shows the prizes that can be won with one, two and three coins times the bet.

As I said, the Golden Goal logo symbol landing on any of the three reels results in a prize that returns the bet even when playing with the bet amount times one coin. Any two logo symbols and the prize already becomes heftier: 6x for one coin, 12x for two and 18 for three coins.

Most lucrative payouts are made with the golden football emblem. The bet multiplied by one and two coins can result in payouts of 800x and 1,600x your bet. These are quite solid amounts anyone can win, but the odds for that are much thinner compared to getting any of the low payouts.

Golden Goal has high variance, which makes a one payline slot even more frosty with the payouts, in my limited experience with these games.

For my closing thoughts, it is impossible to mention the one thing that redeems Golden Goal: bets come quite cheap for a progressive slot!

Players can play with £0.25, £0.50 or £0.75 per spin, which makes the eventual payouts worth significantly more than what you would get on most online slots with the equivalent wager.

Do I recommend Golden Goal to other slot players? I would. £0.75 for a max wager is more than a tolerable amount knowing the list of payouts includes few hefty amounts. And, for that amount, you'd be playing for a progressive jackpot slot. Sadly, the game’s graphics don’t do much to keep you guessing for more.

Sorry for the harsh grades Golden Goal - I know you are a progressive jackpot game, but your graphics appear to be from the football days of Sir Bobby Robson.

Browse casinos with Golden Goal and other slots from Play'n GO. Create an account and try the game for free before making a deposit.

You can play Golden Goal in English, Finnish, Swedish, German and 30 other languages. 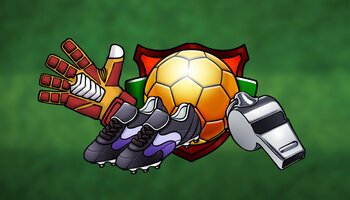