Golden Grimoire brings a mythical world of potions and tonics to life in a magical looking slot. I enter the mysterious tower and explore the pages of the grimoire!

Golden Grimoire is a 5-reel, 3-row slot with 40 paylines that brings the player into a dark, mysterious tower where we’ll concoct special potions and work with mythical gemstones to hopefully create gold!

Developed by Netent and released in 2018, Golden Grimoire is a departure from their usual operation. It has only a limited narrative thread running through it. Instead, it focuses intently on setting the mood. I was immediately immersed in the idea that I was standing behind some old oaken desk in a leaky, crumbling tower working to create all sorts of magical creations.

The first thing I noticed were the graphics, which look more grainy and out of focus than I’m used to from this veteran developer. As it turns out, that was intended! The grainy look is actually a visual effect, all the art is crystal clear, but it adds a sense of realism and makes it seem suitably dour. It even gives things a slight magical tinge.

The background has us look through a giant round window into the night sky, while each spin conjures strange runes on the walls of the tower. When I hit a few Scatter symbols, the books and candles that are scattered in the room start to float. It’s details like this that I love and Netent delivers on.

When it comes to the sound, I was also sufficiently pleased. Again, they keep it very toned down. There is no real soundtrack to speak of. I would rather call them musical tones and haunting soundscapes. I loved it and played with the sound on the entire time. It’s an excellent example of when less is more.

When Netent developed this game I can’t imagine it was easy coming up with suitable symbols, but I think they did a good job. Most of them aren’t terribly original but they did manage to give them a suitable style. I’m fully able to accept that these are the type of symbols a wizard would use in their spells!

Even though I usually prefer symbols that show more originality, I can forgive Golden Grimoire for their choices. It’s clear to everyone who plays it that they put a lot of time into designing these symbols in a specific style that suits the theme perfectly.

Golden Grimoire keeps things pretty simple. There aren’t a lot of features and the ones that are there will be familiar to most players. With a Low Volatility, the game keeps a high tempo and without too many features you’ll be able to get a lot of spins in. It’s possible to change bets between £0.20 and £400.

I think this is a pretty standard collection of features that you’ll find in most modern slots although it does work slightly different in Golden Grimoire.

The main difference is that Wilds do not normally appear. They can only show up when the Mystery Symbol randomly chooses it. Once that happens though, every Mystery Symbol on the screen turns into a Wild, and all symbols to the left of the Wild will also turn into a Wild.

It meant that during my time playing I would not see Wilds very often, but when they did it would often result in a good chunk of the playing field being filled with them. I thought it made the appearance of Wilds more exciting, but I can imagine other people won’t like it as much.

The Mystery Symbol is the most unique part of the slot. These appear on reels 3, 4 and 5 in the base game, and additionally on reel 2 in the Free Spins phase. Mystery Symbols randomly change into another symbol but they are linked, so all of them change into the same symbol.

In the Free Spins phase, the Mystery Symbols work the same except that they stick for the duration of the phase. They will randomly choose another symbol with each spin.

The Mystery Symbol mechanic took me a while to figure out but once it clicked it was interesting to see. I didn’t get a lot of Wilds this way but when I did it would instantly result in quite a big win. Unfortunately the low volatility and the low max. win of 200x my bet meant that it would still not be a huge payoff.

Golden Grimoire is a fun, rather simple classic slot that keeps close to the standard type of game we all know and love. There are few features but I feel the ones that are there work well together. The Mystery Symbols are enough of a change to keep things interesting without completely changing the gameplay.

I didn’t give this slot much attention when it first came out because I prefer slots with higher volatility and more animations, but that was a mistake. The gameplay is extremely solid and the toned-down approach to their graphics and symbols actually enforce like I was really inside a mysterious tower.

Of course, I can’t but help to compare it to similar magical slots. The first one that came to mind was Yggdrasil’s Alchymedes, which easily surpasses Golden Grimoire with its looks but also falls into the trap of adding quite a lot of unique features.

All in all, Golden Grimoire is a nice classic slot which subtly added to the base experience to keep things interesting without going overboard.

Browse casinos with Golden Grimoire and other slots from NetEnt. Create an account and try the game for free before making a deposit.

You can play Golden Grimoire in English, Finnish, Swedish, German and 20 other languages. 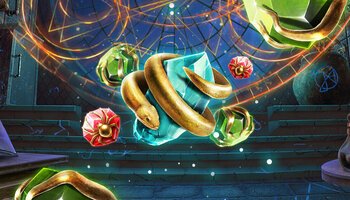