Golden Horns is a classic fruit machine with a clear Asian theme as well as a collection of fitting symbols. In terms of features, this slot is rather light, with only Wilds and Multipliers to keep the player entertained but a massive jackpot is likely to keep them interested.

Betsoft, the studio that released this slot in 2021, was clearly looking for a return to the original type of game. This 1-row, 3-reel slot only has 1 paylines. So far, the game lives up to its roots. If you are a fan of the more popular video slot or something altogether more experimental, this slot is not for you. Clearly, the developer is aiming to create a slot for those that enjoy the most basic gameplay.

In terms of looks, the designers did their best. The background shows us a collection of rather standard visuals in relation to the setting, including a lot of bright red lanterns, a palace in the distance and golden lion statues on either side. The reels are filled with symbols that either relate to the Oriental theme or are based on simple card letters.

If you were expecting a sudden burst of creativity when it came to the sound, you will also be disappointed. The music that plays is a nice sounding song but it is also generic and resembles the songs used in any other slot with the same setting. The sound effects are somewhat themed though, so you will stay emersed in the theme.

The game makes use of a series of symbols that most players will recognise from other slots to populate the reels. Not that the symbols have been copied from any other game, but that the use of Koy carps and bonsai trees isn’t exactly the pinnacle of innovation. Again, I think this is alright considering the rather limited subject matter but it feels like it could have been made to stand out a bit more.

The payouts for each win are rather varied, with the Wilds obviously paying out the most but they are also exceedingly rare. I didn’t get three of them on the screen at the same time the entire time I was playing.

The game comes with High Volatility, and you should expect a number of spins without anything happening before getting a larger win. Players that manage to get three Wilds on the payline with the maximum 88x multiplier will win the jackpot, a max. win of 25,344x your bet.

When playing Golden Horns, you won’t encounter many features as this is a callback to the classic fruit machine. With only 1 payline there isn’t a lot the developers could add. Still, you will encounter two basic features:

The Wilds are reasonably common when playing the game, showing up enough to feel like they’re part of the game. Still, even with a Wild the odds of getting a win are low. When I was playing, I found that you can go without any wins for dozens of spins. This game isn’t for players that enjoy a steady supply of wins. Instead, you’ll have to get used to waiting.

The multiplier feature is locked behind getting a win with a Wild on the screen. Since Wilds are reasonably common you can expect this to happen now and then, but it was still not very frequent. Another thing to note is that it seemed like I was only awarded a smaller multiplier when there was only 1 Wild on the payline.

There isn’t a whole lot to say about Golden Horns that wouldn’t apply to most fruit machines in existence. The appearance is fine with enough animations and some nice art. Where the game might have scored some extra points with originality, it instead leaned into the expected symbols and art.

Players that enjoy the classic fruit machine and its basic gameplay will get their money’s worth with Golden Horns. The game doesn’t do anything special to detract from the base game, with the Wilds and Multipliers seamlessly integrated into the game.

If you are someone that prefers a more modern slot, or you simply like a game that gives you a win a bit more often than once every 50 spins, you will want to skip Golden Horns. Even though it does things perfectly fine, it also clearly aims to only please a very specific type of player.

Browse casinos with Golden Horns and other slots from Betsoft. Create an account and try the game for free before making a deposit.

You can play Golden Horns in English, Finnish, Swedish, German and 19 other languages. 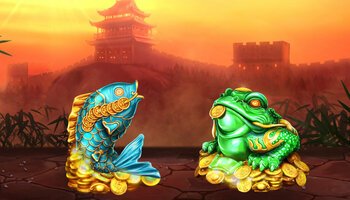