Golden Lamps has its heart set in the Middle-East, drawing inspiration from classical tales to bring to life a world filled with magic and adventure. Flying carpets, genies and Stacked Wilds await us.

Released in 2017 by developer Red Tiger, Golden Lamps makes it clear it was inspired by 1001 Arabian Nights without being clear which tales they are referencing. The background shows us an ostentatious plaza in the middle of a desert city, with the 5-reel, 3-row playing field projected unto a decorated temple. The symbols used in the game are mostly card letters in sharp colours, with the high-paying symbols referencing the famous stories most of us will recognize.

For a game that was released so recently by a developer that has shown itself to be capable of impressive art-design, I was rather shocked by how poorly the game looks. The symbols themselves are sharp but lack any kind of identity or detail. There are also no animations to be found worth noting. The background is barely visible behind the reels and isn’t quite as sharp.

When I began playing the game it immediately felt like it was rushed, starting with the graphics and the concept and getting worse as I dove deeper into the slot. The music is completely out of place, featuring drums that I would expect in a jungle setting, not one based on Arabian Nights. Wins are a simple jingle and special symbols appearing plays a brief riff. It all feels incredibly misplaced and didn’t pull me into the game at all.

The version I played had a progressive jackpot attached to it, counting up during a 24-hour interval before resetting. Other versions of Golden Lamps don’t have this jackpot and instead allow players to go for a max. win of 500x their bet. This isn’t a very big number but considering the Medium Volatility, players have a reasonable opportunity of winning it.

Golden Lamps was not just rushed in terms of design, the features are also rather simple. I wouldn’t call them bad since they just behave as they ought to but there is no creativity to be found here either.

While playing, the Wilds showed up pretty regularly which helped in creating winning paylines. The payout per symbol is rather low so a lot of the time these wins would not make back the cost of the spin. I found that while playing I’d experience a slow but steady shrinking of my funds with only the occasional bigger wins to help push it back up.

The Free Spins mode did not trigger very often, even though I would get 1 or 2 Free Spins symbols on the screen every other spin. Once it did activate it would grant me a random number of Free Spins, usually between 6 and 10. The Free Spins mode plays almost exactly like the base game except that Stacked Wilds can sometimes appear.

Getting any Wilds on the screen is obviously always a good thing but the size of the wins the Stacked Wilds would generate was often disappointing. I didn’t think the Free Spins mode was especially good at winning me a lot of coins.

All in all, the features were similar to the rest of the slot: unimpressive, uninspired and inconsequential.

It’s rather baffling to me that Red Tiger wasn’t afraid to push this slot out in 2017. The developer has been around for years before that and even older games they made aren’t as lazy and underdeveloped as this one. The game plays fine at its core, it’s a simple slot that spins the reels and shows you if you won any coins.

There is just no sense of creativity or joy to be found. The music is a complete mismatch to the setting, which I found the biggest crime. Luckily the game lets you mute it. The parts of the slot that worked well were parts we can find in other slots by this developer so there really isn’t anything to convince a player to stick around for this one.

If you’re a player that is desperate for any kind of slot, who feels like they have played all other games there are, or who simply wants to play on the definition of a simple video slot, I would recommend Golden Lamps. If you’re not one of those players, I’d say keep looking elsewhere.

Browse casinos with Golden Lamps and other slots from Red Tiger. Create an account and try the game for free before making a deposit.

You can play Golden Lamps in English, Finnish, Swedish, German and 18 other languages. 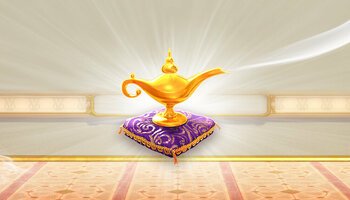