Golden Lotus takes place in Asia, where we’re treated with a beautifully colourful slot that houses a collection of amazing art as well as the possibility of a big win!

This slot was developed and released by Red Tiger in 2016, which was a very productive year for this studio. The concept of Golden Lotus seemed rather simple and unoriginal at first glance and even though it didn’t stray too far from the popular formula I did think it added enough to stand out somewhat.

That’s not to say it doesn’t use a lot of industry standards. The game has a 5-reel, 3-row playing field and comes with the expected 20 paylines. There are low-paying symbols that are based on card letters and the free spins mode also doesn’t differ a lot from the base game. Nonetheless, I found the graphics to be very appealing thanks to the bright colours and the art is very detailed and intricate.

There aren’t many animations in the game except for the Free Spins and Wild symbols, but once the Free Spins mode triggers we are treated with a full-screen image of a woman spinning her umbrella to grant us a number of spins. It was a small detail in the scope of the slot but it did help in bringing the character alive.

The sound is what anyone would expect from a slot like this, with strong Asian overtones in the music while the sound-effects were more generic and based on bells and harps. It wasn’t especially unique but it obviously fits the theme well.

The symbols in Golden Lotus were largely based on Asian culture, with different objects and even animals as part of the selection. In contrast, the low-paying symbols were based on high cards and made to look like they were hand-drawn with a paintbrush. Although it looked good, I wish they had created more original symbols to fill out the reels.

Since there were quite a few symbols and half of them were low-paying, the slot had a High Volatility. Getting a win was pretty difficult when I played it and it’s statistically about 50/50 you’ll only get a small payout. The main target should be to hit the Free Spins mode since I found that to be the part of the slot that rewarded the biggest wins.

There aren’t that many features in Golden Lotus but I found them to strike a good balance between interesting and helpful. The Free Spins mode had the biggest impact on the gameplay but the other features showed up more often.

Even though the features weren’t very original I did find them to work well. The Wilds and Sticky Wilds showed up a lot during the base game. The normal Wilds operated as you’d expect while the Sticky Wilds had some randomness associated with them. The Sticky Wilds didn’t stay in place for a set number of spins but could instead stay for a random number. This could be between 1 and 10 spins, indicated by the little dots on the tile.

During the Free Spins mode, the Sticky Wilds stayed sticky the entire mode which could result in some massive wins as the playing field slowly filled up with Sticky Wilds. Then again, it did feel like the Wilds showed up less regularly during this game mode.

Something that added some extra spice was the magic petals that occasionally drifted through the screen. During the base game, these magic petals could add extra spins to the Sticky Wilds, keeping them in place for a longer time. During the free spins mode, the petals could grant extra free spins. I didn’t see them appear that often and their effect could be negligible but I still thought it was a nice way to help the player a bit more.

Golden Lotus is a nice looking slot that uses a rather tired theme as a source of inspiration and manages to give it some personality. I didn’t really feel like it was enough to make the game stand out from its competitors but it does give the player enough to see and enjoy while they are playing.

The high volatility was quite harsh at points and I rarely had the impression I was actually winning enough to compensate for my bets. It’s possible to choose a bet between £0.10 and £20 which helps in relegating that risk a little but at the same time, it also makes it less likely for any truly bank-breaking wins. The max. win of 2,784x your bet is quite nice but it felt unreachable to me.

If you’re a player that enjoys classic slots with some standard features than Golden Lotus will be right up your alley. It was a little too modern for people that enjoy old-school fruit machines. Similarly, players that go for the super-modern and highly innovative slots won’t find too much of that here either.

Browse casinos with Golden Lotus and other slots from Red Tiger. Create an account and try the game for free before making a deposit.

You can play Golden Lotus in English, Finnish, Swedish, German and 18 other languages. 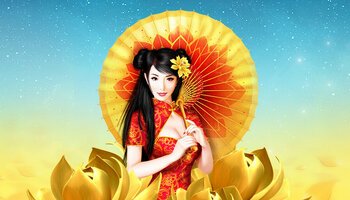