Golden Offer puts us in a Chinese temple as we play on the special reels and are occasionally awarded a golden offer by the two mythical lions: do we take our prize or keep going?

Created by Red Tiger and released in 2016, Golden Offer shows us that the developer can create slots that aren’t just a reimagining of the fruit machine and standard video slot. In fact, this game introduces some features I haven’t really seen before!

The game has 5 reels but they come in a slightly different shape with reels 1 and 5 having 3 rows and reels 2, 3 and 4 having 4 rows. Due to this unique shape, the game has an impressive 40 betlines. The game is dressed up to resemble some sort of Asian temple with two lion statues on either side of the playing field.

Golden Offer looks impressive even though there aren’t that many animations or special features to discuss. The two golden statues are the most interesting part when it comes to its appearance, sometimes coming to life and affecting the game in some way. One of these ways is when they throw a golden ball onto the reels, adding Wilds as it bounces across the screen.

The setting is a popular one amongst many developers and I understand there is only so much they can do with the Chinese theme. Still, the game is not shy with its uncreative approach. Even the music is a standard Chinese tune with gongs when there is a winning payline. It’s not bad or unexpected, but it makes it difficult to differentiate this game from other slots.

The Golden Offer symbols are not very original, with most of them based on high cards. The high-paying symbols are very simple and didn’t really seem to relate to Chinese culture either. Most importantly is that they are easy to tell apart and that is what they are.

Since there are quite a few symbols and the odd shape of the game it comes with a High Volatility. In my experience, the game had a trend of slowly declining my funds while occasionally boosting it with a substantial win.

Besides the unorthodox shape of the playing field does Golden Offer have some more special features. Most of these can activate at random during the base game.

The most interesting feature to me, and one I hadn’t seen before, was the Golden Offer feature. This one triggered when 3 Golden Offer symbols appeared on the reels. When this happened the playing field disappeared and I was presented with a coin value and the choice to either accept this win or reject it.

If I accepted it, the Golden Offer was over and the win was added directly to my funds. When I rejected it a new offer was created which could be higher or lower than the original offer. Again, I would be given the opportunity to either take it or go for another try. If I rejected this again it would give me a final offer but I would automatically accept it, whether it was higher or lower than the previous bets.

I found the choice to make quite exciting as the wins were pretty substantial plus it felt like I had a way of influencing the outcome. Even lower wins were still more than a dozen times my bet, which is possibly why the player can only choose a bet between £0.10 and £20 which is quite a limited scope compared to other slots.

The other features were enjoyable too but since they triggered randomly it was impossible to depend on them. Since there are 4 different features that can active it made it even harder to really see which ones worked best. All of them did help in creating wins though.

I think that during my time playing most of my wins and especially the big wins came from the different features activating. The base game itself, without any features, only very rarely succeeded in landing a winning payline and those would still be small. All in all, it was an enjoyable experience with plenty of things happening to keep the gameplay interesting.

Golden Offer might not be the most original slot in terms of theme and appearance but it still plays very well. The graphics are pretty and the lions are animated beautifully, creating something pleasing for the eye. The features are what really make the game interesting.

The Golden Offer feature was quite original even though it was very simple but it didn’t show up enough to carry the game on its own. The random lion features were used to fill that gap and I believe they did it well. The different features were unique compared to each other to the point that they all added something new to the game.

The max. win of 2,592x your bet is quite substantial although the maximum bet you can stake is low compared to other slots. Because of the high volatility, I would advise against a high bet per spin anyway so I think it works out perfectly!

Browse casinos with Golden Offer and other slots from Red Tiger. Create an account and try the game for free before making a deposit.

You can play Golden Offer in English, Finnish, Swedish, German and 18 other languages. 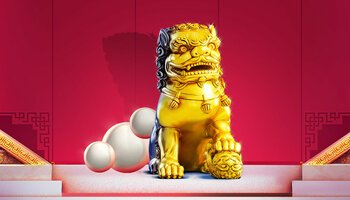