Golden Toad centres around a giant toad sat in the middle of endless piles of gold and jewels as the reels spin. The game features sticky wilds, free spins as well as counting any consecutive symbols as wins.

This slot has a 5-reel, 3-row playing field that takes its inspiration from Asian culture without being too specific about its setting. The Golden Toad takes up most of the space behind the reels while we can see mountains of gold behind it, and far in the distance the skyline of a major city. What does it mean? We don’t know, but it helps set the mood somewhat.

The game was developed and released by Red Tiger back in 2017, and it kind of shows. The symbols are becoming more and more familiar as most of the games released at that time use the same ones. Especially the low-paying symbols are blatantly the same as in many other Red Tiger slots.

Golden Toad comes with 10 paylines but the game uses a system where wins aren’t counted started on reel 1. Instead, the game counts any symbols on consecutive reels as a win. Meaning a win can also start on reels 2 or 3 to count. That doesn’t increase the number of paylines but it does increase the likelihood of a win. As a result, Golden Toad has a Medium Volatility.

The game looks fine, with the high-paying symbols mostly being golden coins in different patterns. I didn’t think that was a good choice since the coins look similar and make it hard to tell at a glance if there was a win or not. The game does highlight the symbols that are part of a win so that helps. The low-paying symbols are unfortunately well-known to anyone that has been playing Red Tiger slots the last couple of years. They’re the standard card letters in a calligraphy style with even the colours the same across the different slots.

Players have the ability to choose a bet between £0.10 and £40 per spin, which is a smaller selection than most other slots offer. Still, I thought this was a spread large enough to let players decide how much risk they want to take when playing. The game spreads out its wins over a longer period of time, with the occasional natural win but most of the time depending on the Wilds or Free Spins mode.

Golden Toad doesn’t offer a lot of features and the ones that are included are rather simple. I don’t think anyone but the newest players will need any introduction to what is part of the game.

The main feature that is always active is the consecutive wins, which means the game counts any symbols appearing on consecutive reels as a win. Although this is always active it didn’t trigger as often as I would have liked. I think that it does help lower the volatility slightly but it’s not enough on its own to provide a steady trickle of wins. Even when it did, they were usually only three-of-a-kind.

This is where the random wilds came in. The game has no normal wilds that appear on the reels as they spin. Instead, the playing field would fade and random wilds would be added to specific tiles, usually between 2 and 6 different ones. Then the reels would stop spinning and the wins were counted out. Although this made these spins more profitable, it also meant the normal spins fully depended on normal symbols appearing on consecutive reels.

The Free Spins mode triggered occasionally. Not so often I would consider them frequent but not so rarely I would call them inconsequential. Getting 3 Bonus symbols on the screen would first show the game counting a random number of free spins, represented by golden coins hanging on a string.

Then the mode itself would start, depleting the coins as it spun. Getting a Free Spins symbol during this mode would have either a 1 or a 2 on it, representing the number of extra spins granted. I would see these quite often and I assume most times the total number of free spins will be higher than what you start with.

The special feature exclusive to the Free Spins mode is the Sticky Wilds, which are called Locked Wilds in Golden Toad. They simply appear randomly and stick to a certain location on the reels for as long as the free spins last. Expect between 1 and 4 to appear during most free spins modes.

All in all, the features didn’t really grab me but they were still enjoyable. The Free Spins showed up often enough to make a difference, with the right Sticky Wilds really increasing the size of the wins. Meanwhile, the base game had an interesting feature in the consecutive wins but it only rarely played a part in actual wins.

The look and feel of Golden Toad will be very familiar to anyone that has played any Red Tiger slot before. Their games all enjoy a very dependable gameplay experience that is familiar without being jarring. Most players will have a nice time without it really leaving a lasting impression.

The combination of features is good enough to be helpful, often helping me end up above my starting funds. Still, it pays off to make a careful choice on the size of your bets depending on the risk you want to take. With its spaced out wins, betting too highly can quickly drain your funds. The max. win of 500x your bet is nothing to write home about and can be seen more as a nice extra than a goal on its own.

If you’ve ever played a Red Tiger slot before, Golden Toad will offer more of the same. If this is your first Red Tiger game, you’ll know what to expect from the rest of their library!

Browse casinos with Golden Toad and other slots from Red Tiger. Create an account and try the game for free before making a deposit.

You can play Golden Toad in English, Finnish, Swedish, German and 18 other languages. 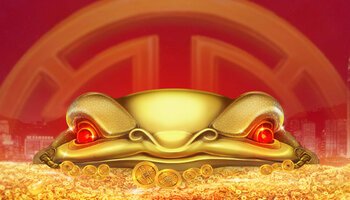