Play Goldilocks and the Wild Bears

A bedtime story but not as you know it, Quickspin brings us Goldilocks and the Wild Bears. The childhood mainstay is now given the video slot treatment. If fairytales gone wrong and anthropomorphic bears are what you’re after in a game, then look no further.

Are you sitting comfortably? Then we’ll begin...

Something Wicked This Way Comes

It seems Robert Southey’s 1837 version of the classic fairytale has been pulled apart and glued together more times than the story itself has been told. So, what will Quickspin make of it? I was eager to find out.

First impressions: I’m not in Kansas anymore. I was expecting to be greeted by an angelic Goldilocks - all sweetness and light, butter wouldn’t melt etc. etc. I’m instead face-to-face with what is possibly the most terrifying rendering of Goldilocks known to humankind. This is a Goldilocks as never before seen - all pent up rage with a sadistic streak and Machiavellian glint in her eye. Even her curls look menacing… And what is she going to do with that oversized spoon?

The bears on the other hand are portrayed as kindhearted but slightly on the janky side. Mama bear is in what looks like her Sunday best. This character gets off lightly, adorned with nothing more than a bonnet and an ice-cold thousand-mile stare.

Papa bear, again, is looking a little dogeared and a touch on the simple side but you wouldn’t cross a nighttime street to avoid him.

Baby bear is akin to a cub who, at birth, bounced a little too enthusiastically down the maternity ward stairs. His attempt at a loveable quiff is both heart-wrenchingly futile and endearingly optimistic. It’s going to take a bit more than that though, mate.

Supporting graphics are all accordingly put through the fairytale filter and present an immediately familiar scene, yet you also get the feeling that something is awry. The sweet xylophone music plodding along in the background underscored by a menacing string section helps to bolster the sense of impending doom.

Keeping with the theme, the Free Spins round is also duly doolally. Goldilocks (for better or worse) becomes animated with a voice she seems to have stolen from a Teletubbie. Told you she was a wrong ‘un. Simply land three or more Goldilocks symbols and you’re in for 10 Free Spins. Retrigger more Free Spins by activating the Bears Turn Wild feature.

Cottage and Porridge symbols are cast as Wilds in Goldilocks and the Wild Bears. If you’re not a fan of oat-based breakfast foods, you will be once learning that the porridge symbol acts as a multiplier. One porridge wild multiplies 2x, while a combination of two porridge wilds brings 3x and three bowls of porridge, 4x.

Bear-like Bets and Payouts Fit for a Princess

A 250x maximum win potential might not be the happy ending most players expect from a slot. With rival slots offering max. wins in the hundreds of thousands, this slot is left somewhat lacking. Although, the £0.25 minimum bet and £100 maximum provides a range that accommodates most gaming budgets.

A down-to-earth RTP of 96.48% with volatility set at the mid-range, Goldilocks and the Wild Bears is a game accessible to the widest field of slot players.

And They All Lived Happily Ever After?

Quickspin has taken the visual tropes of a fairy tale then subverted the genre, and I love it. It feels so wrong that it’s most definitely right. Goldilocks and the Wild Bears seems like it was made in the vein of a Brothers Grimm fairy tale. This graphic approach is not only fittingly creepy - it also manages to be pretty darn cute at the same time.

When it comes to tasty wins, I can be a pretty impatient gamer and tend to lean more towards the high volatility end of the variance spectrum. The multiplier meter in Goldilocks and the Wild Bears seemed reluctant to budge past 2x, so perhaps Quickspin could have rejigged their multiplier maths model to be a touch more accessible.

The Gameplay isn’t anywhere as chaotic or enjoyable as the characters would like you to believe. It's a shame when such joyfully manic illustrations are let down by an uninspiring mechanic, but them’s the breaks. It would have been nice to see an animated bonus game in Goldilocks and the Wild Bears, the characters being so appealing.

Perhaps in fairytale land, Goldilocks and the Three Bears would be doing great business and ranking higher among other slots of the same style. It’s the insipid gameplay and unimaginative features that makes, for this slot at least, an unhappy ending.

Play Goldilocks and the Wild Bears for free

Browse casinos with Goldilocks and the Wild Bears and other slots from Quickspin. Create an account and try the game for free before making a deposit.

You can play Goldilocks and the Wild Bears in English, Finnish, Swedish, German and 23 other languages. 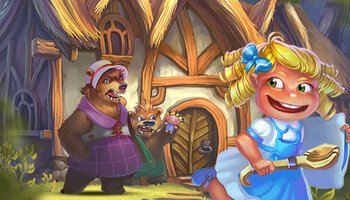