Gonzo’s Gold takes us back into the jungle as we follow Gonzo once again as he delves for treasures inside ancient temples. This slot features our famous protagonist as well as various game elements such as free spins and expanding symbols.

The slot was developed by NetEnt and released in 2021, the latest instalment of their Gonzo series. Most players will likely be familiar with Gonzo’s Quest and this feels like a continuation of the format. This time, the game is built around a 5-reel, 5-row playing field with a change in the way wins are calculated. Instead of paylines, the game makes use of clusters, with big enough groupings of the same symbol resulting in a win.

As we have come to expect from the Gonzo slots, this one is once again set in an ancient Incan temple. The luxurious gold design looks great, with attention to details in the background as well as the symbols themselves. Unfortunately, I didn’t see a lot of animations and as a result, the game felt quite static to me. This is a change when compared to other slots by this developer. Gonzo himself also doesn’t play a big part, only counting as a simple high-paying symbol.

The music is good, with a full band playing music that seems clearly inspired by the region the game is set. We can hear different instruments playing, from drums to flutes. I did think that the tune playing when I got a win was a bit too loud, drowning out the background music. That’s too bad because it did a good job setting the mood.

Gonzo’s Gold makes use of a standard selection of symbols, divided into the usual high- and low-paying groups. I thought it was a shame that the low-paying symbols are all card letters. They have been redesigned slightly to better fit the Incan design but they still clearly look like simple letters. That doesn’t make sense when considering the setting. The high-paying symbols are different coloured masks that look nice but feel rather disconnected from the theme as well.

The player should be aware that the game has High Volatility, which in my experience resulted in very infrequent wins. Even when I did manage to get a win, the payouts were often low. The game has an RTP of 96.11% which is about average for a game like this. Still, if you play with standard bets you will notice a slow but steady decline in your funds.

Players can augment their bets by either increasing or decreasing them. The range goes from £0.10 to £200 per spin, which is a huge margin. Most other slots don’t offer that much choice when picking their bets. The higher bet is obviously a bigger drain on your funds but would also increase the size of any wins. Meanwhile, the maximum win is 6,500x your bet.

Gonzo’s Gold takes some pretty big steps away from the original Gonzo’s Quest. The first game introduced a lot of players to the cascading reels feature, but that has been removed here. Instead, the slot uses the cluster pays mechanic. That also means there are no more paylines.

A lot of the gameplay in this slot felt very simple. The only real deviation we can see from the average slot is the cluster pays mechanic and even that isn’t that impressive. Players get a win when either 4 or more low-paying symbols touch, or when 3 or more high-paying symbols touch. The free spins symbol counts as a scatter, meaning it will count towards a win regardless of its position on the screen.

I found this to be the biggest disappointment. The expanding symbol will not always expand. During the free spins mode, only when there are at least two symbols touching will they expand to fill the reel or row. This means that even with this feature enabled it’s practically impossible to get big wins. If you have a row full with the same symbol, it won’t expand to fill the reels since it would only fill up the row.

Gonzo’s Gold feels like a suitable successor to Gonzo’s Quest without really adding much to the format or even the world. Gonzo is barely in the game, only seen as a symbol on the reels. The original slot would attempt to have him come across as a character, but that is gone now. As such, the game feels interchangeable with other slots set in a gold Inca temple.

I found the gameplay to be solid if simple. The expanding reels mechanic disappoints, especially considering the difficulty of getting into the free spins mode. Expect to play for a few hundred spins before triggering this mode, and it often still is not paying off as much as we’d like.

All in all, I can’t really say it’s a bad slot. It does what it does well enough to feel like a slot, but never does anything to challenge what we expect. The game thus doesn’t really feel like a NetEnt game and comes across as generic and quite simple. A good choice for those that just want some mindless entertainment, but a bad fit for those of us that are looking for creativity and a challenge.

Browse casinos with Gonzo's Gold and other slots from NetEnt. Create an account and try the game for free before making a deposit.

You can play Gonzo's Gold in English, Finnish, Swedish, German and 20 other languages. 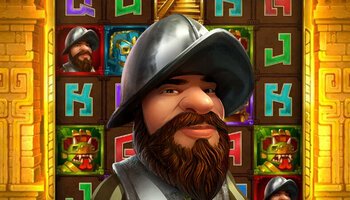