Gonzo’s Quest is a classic slot game by software provider Net Entertainment. Spread over five reels and 20 pay lines, this Mayan-themed slot game, features the unique Avalanche Reels, which can reward you with up to 5x your bet for every winning combination.

It ultimately was the game to introduce me to the gaming industry, and since then it has been a reminder of how far games have come along.

This slot game has a long history, stretching back to 2013, and since then, it has developed a bit of a cult following. With the legendary explorer Gonzalo Pizzaro, or Gonzo for short, as the main protagonist, this slot game solidified NetEnt’s road to success overnight.

Today Gonzo is the one true mascot of online casinos, you see him everywhere you look, making sure that Gonzo’s Quest will always be in the public consciousness.

I still remember fondly when this game came out. It was a complete game-changer for NetEnt as it was the first of its slots to introduce the Avalanche feature. This nifty feature sees symbols dropping from the top. When a winning combination falls onto a pay line, the winning symbols are removed, with new symbols dropping and replacing them from the top.

When this slot game was released, there was a lot of hoopla around this game. For starters, the game kicks off with an animated short movie, that introduces Gonzo’s story; We see our hero jumping ship and going it alone in search of gold in the city of Eldorado. You need to bear in mind, that back in the early 2010s, short movie-stills introducing a slot game were unheard of.

The graphics itself are striking. When you hit a winning combination, blocks of stone symbols explode. There is no soundtrack as such. Just the hum and din of the jungle as you would expect, should you don your Indiana Jones hat and storming the Amazon jungle.

It is a widely enjoyable visual experience, and with bonus features to boot, Gonzo’s Quest was a step forward from boring fruit machines.

Fun Fact: If you stall your gaming and take a mini-break, Gonzalo Pizzaro himself, brings out his map and mumbles to himself.

There is not much to write about in terms of symbols. Bear in mind, that this is a Mayan-themed slot game, so symbols entail a variety of masks and animals etched onto stone slabs. Most importantly, the question mark symbol acts as a wild to replace for all other symbols in a bid to create a winning combination.

The most rewarding symbol is the heath, which can reward you with 125x your stake if you hit up to 5 in combination.

Moreover, land another three scatters during the free falls round, to earn yourself an additional 10 free spins. Phew.

Gonzo’s Quest has stood the test of time, with many players still flocking in droves to it. This cult classic has entertained thousands of players and continues to do so, to this day.

But before you go all out spin-happy to play Gonzo’s Quest, there should be a few words of caution. This game is of medium variance, so you can’t expect to generate wins as often as you’d like to. The paytable is generous enough, but if you’re not hitting winning pay lines, it will deplete your bankroll fast.

Additionally, if you are a seasoned player who loves fast-paced games…. well, maybe this isn’t the game for you. What I found tedious is that when you do hit a winning combination, the game slows down a tad until symbols explode and are replaced by new ones.

Unfortunately, this game lacks the mechanics of speed. This is, of course, subject to opinion. Personally, I like games to play out faster and found that Gonzo’s Quest can lag a little, but each to his own.

Browse casinos with Gonzo's Quest and other slots from NetEnt. Create an account and try the game for free before making a deposit.

You can play Gonzo's Quest in English, Finnish, Swedish, German and 20 other languages. 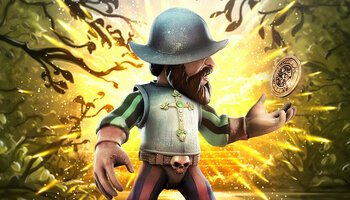 Easy fun and exciting for anyone

This is my favorite slot by far. Like many times with favorite slots, you have love and hate relationship with the game and this is true with Gonzo, as well. I love the bonus feature, the golden gates of Eldorado opening. It promises so much, but quite often gives you way too little. Normal game with autoplay can suck your bankroll dry like in no other game, but also deliver some decent spots for excitement. That's why the love and hate. I know many probably won't share my infatuation for Gonzo, but I guess it's the story behind the game, the character and the golden gates which together have converted me to a die-hard fan.