Gordon Ramsay Hell’s Kitchen is obviously a slot that is based on the very popular cooking show with the famously foul-mouthed presenter and chef Gordon Ramsay. This slot turns the TV show into a slot while adding features like Wilds, Free Spins and a bonus game.

The game was developed and released by NetEnt, who are familiar with branded slots as they have created quite a few over the years. This is one of their latest, released in 2021 and showing off the latest of what this studio is capable of. Be ready for some excellent graphics, a lot of animations and a tonne of recognisable elements from the show. All of this takes place on a standard 5-reel, 3-row playing field with a total of 20 paylines.

As is often the case with slots from this developer, the graphics are excellent. Even though the low-paying symbols are based on card letters, they are made to look like the heating elements in ovens which does fit the setting. The other symbols include various dishes and food items with Ramsey himself as the highest-paying symbol.

I thought the sound design was acceptable, obviously using elements of the original theme song when there’s a special feature activated. Most of the time, you’ll just be hearing a slow and steady soundtrack in the background. Ramsay himself can be heard from time to time, mostly when a feature is triggered.

Gordon Ramsay Hell’s Kitchen brings the show to life by making sure the colours and symbols that you would see in the actual show are also seen here. There aren’t many characters part of the slot itself, making sure the game is relevant to the entire show and not just the specific season that features those people. The symbols that represent different meals look good enough to eat.

When it comes to the gameplay, the high-paying symbols are easy to tell apart but the card letters are dimmed unless part of a win. This can make it quite hard to see which letters are on the screen at any one time. When you do get a win, this will be highlighted as well as the payline, and it shows the total coin win on the screen.

Speaking of winning, you can expect a steady number of wins as you play. The game has Low Volatility which seems less common in slots nowadays. The wins are not very high as symbols have a low payout, but you can expect to see a win every few spins. That’s not to say you will keep your funds stable because I had mine drop down quite fast.

Gordon Ramsay Hell’s Kitchen has low volatility but that won’t mean you will be treated to the special features very often. The game has a couple of regular features and some random ones that are triggered during the base game.

First a quick look at the features themselves:

Even with low volatility, the game relies heavily on its free spins mode to help the player get their funds up a bit. Although wins are frequent during the base game the payouts are low which means it will be hard for players to make back even a few spins at a time.

There is the possibility to adjust your bets, choosing a bet between £0.20 and £400 per spin to make sure the funds don’t drop too fast. Obviously, this won’t help if the wins aren’t big enough to win back your bets, making it tricky to stay in the game long enough to activate the free spins mode.

Speaking of the free spins mode, it was extremely difficult to trigger and I only managed to do it once. It did have a good impact on my funds but I did not pick the winning team and that meant I walked away with a lot less. Even after this, I was still deep in the red.

Gordon Ramsay Hell’s Kitchen is a nice adaptation of the television programme into a slot. The different elements are all there, Gordon plays a big enough part and the free spins mode brings home the idea of competition. The design is beautiful, which NetEnt has obviously built a reputation on.

The gameplay is simple and competent, leaving players with little doubts as to what is going on. The low volatility is something you will have to accept, although I would have guessed it to be medium if I hadn’t seen the listed volatility. Players that enjoy a steady stream of smaller wins will find this slot to provide that.

If you’re a power player, obviously the maximum bet will allow you to bet it big but I don’t know if it’ll be worth it. The max. win of 500x your bet is paltry even when compared to slots with the same volatility. This really feels like a game meant for fans of the show who just want to spin the reels for a while.

Browse casinos with Gordon Ramsay Hell’s Kitchen™ and other slots from NetEnt. Create an account and try the game for free before making a deposit.

You can play Gordon Ramsay Hell’s Kitchen™ in English, Finnish, Swedish, German and 20 other languages. 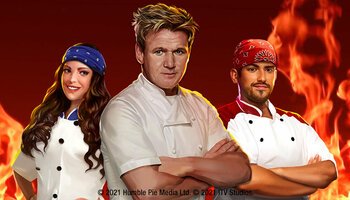